Dining Out for Life

After an inexcusable length of time, I finally got to Mingle last week. The stars aligned and I was unexpectedly free and there was a seat available at All Over Albany's table - perfect! I've been inside the restaurant since it became this more recent incarnation, but hadn't seen things going full throttle. It was busy! I found the variety of patrons to be refreshing, families, couples, groups of friends...a nice mix. The volume issues have been addressed with the addition of fabrics and rugs, but it is still a noisy place. Not really a complaint, just an observation.


This visit to Mingle was the second time I had been in a restaurant on this particular day and I was hoping for a better experience than I had suffered earlier in the day. That situation was truly bizarre, even for me. Essentially, I was driving with 3 other women, one of whom was hungry. When we pulled up to Chili's I was dismayed, but prepared to order a salad or something else equally healthy and light. Well...I sat down with that laminated menu and had a complete (internal) meltdown! There was absolutely nothing on that menu that I was willing to ingest. Everything I read screamed FAT or SODIUM or NOT FRESH. I just couldn't do it. Fortunately, I had a couple of oranges, some granola bars and yogurt pretzels in my car. And that is why I don't take road trips without packing rations. 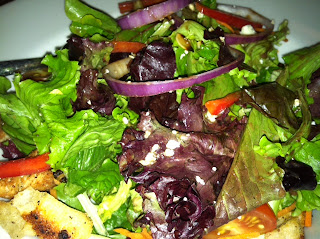 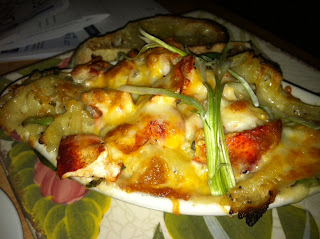 My expectations of Mingle were much higher, and generally met. I had a salad that was a beautiful array of gorgeous fresh vegetables in a generous portion. My only complaint was the scantness of the blue cheese - for $12 I guess I just expected a little more. For my second course I had a half order of the lobster mac and cheese, influenced by Steve Barnes' endorsement.

Now, don't try to order a half portion of this super rich dish because it isn't really available. I was specifically told I would never get a half order of this pasta again and that an exception was made because of the evening's fundraising event. I guess I'm a bit confused by this, I mean, it's pasta and I can't imagine it is cooked to order so how much more difficult is it to serve half as much and charge $2 more than half the price? It is a lovely dish and I can almost imagine them selling more of it if it were available in a more petite portion. We all know how much fat is in mac and cheese and not everyone wants to reheat leftover lobster, so why not make it available in two sizes? Just a thought. This was my first time eating lobster mac and cheese so I obviously don't have a reference point, but I was surprised by the strong garlic flavor which overwhelmed the delicate taste of the shellfish. I was very pleasantly surprised that the lobster didn't suffer in terms of moistness by the time in the oven. A nice entree in a perfect for one portion.

I've heard really good things about the Korean tacos and those are next on my list to try.  Do you have any Mingle favorites to share?