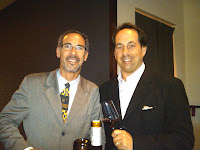 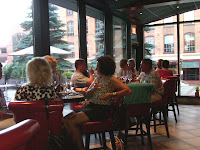 This week's Tasting Tuesday at Dale Miller Restaurant featured Joseph Carr - the man and his wines. If you aren't familiar with Joe, you should know that he is a local guy, originally from Berlin, N.Y., who has followed his passion for wine and created a successful career doing something which he loves. In 2005, following a number of years working in the hospitality industry, as well as for major wine importers and distributors, Joe, along with his wife, daughter and dog, began his own wine company. He is a negotiant - which means he buys fruit and makes wine which he bottles under his own Carr label. His wines are available in both retail stores, and select restaurants, in a fairly broad geographic area.
This would probably be a good time for me to mention that I have no formal wine training or knowledge - that would be the husband's forte. My hope is to not be embarrass myself here by revealing how little I truly know about wine, I'm only offering my own impressions.

Joe offers an array of varietals, all fairly priced, and we sampled six wines Tuesday evening. The first two wines were from his Josh line; the Chardonnay (2008) and the Cabernet Sauvignon (2007). These wines are named after his father, and are considered to be his entry level wines. They can be found in local retail stores (try Capital, Empire, Delaware Plaza) for about $18 per bottle. Both of these wines were easy to enjoy and had the characteristics that one would expect from their respective grapes.
The order we sampled the wines in was a bit unique. I'm accustomed to starting with the lightest of whites and then proceeding to more substantial whites, light reds and then full bodied reds, but this particular evening we bounced around a bit as Joe led us through his offerings. We followed the Josh Cabernet with a delicious Sauvignon Blanc (2008). I found this wine to be an ideal warm weather sipping wine - with or without food. Lovely.
Our next wine was one with which I was familiar, the 2007 Sonoma Coast Pinot Noir, which retails for about $20. I have been a fan of this wine since it was initially released and it remains a household favorite. If you haven't tried this wine, you'd better get it soon - there isn't much left and the '08 release is going to be a bit different as the fruit is being sourced from the Santa Cruz Mountains rather than the coast. This is a terrific Pinot, with berry flavors and a wonderful viscosity for dangerously easy drinking.
We finished with two of Joe's Reserve selections. The Reserve Chardonnay (2008) was my absolute favorite wine of the event. It was intense without being woody and had a beautiful straw color. Joe only made 500 cases of this wine and, upon release, it will be available both on Tom's winelist at Dale Miller and at Tom's house, because we're getting one of those cases - hello, Summer 2010 wine. This wine should retail for about $28 a bottle, while the Reserve Cabernet Sauvignon (2007), the event's final wine, is currently retailing for ~$25. I wish I remembered to take more notes about where Joe sourced his fruit from, or more detailed tasting impressions, but after about 5 different tastings, I honestly get a bit muddy. Sorry.

There are two more Tasting Tuesday events prior to our family trip to Italy - go ahead, hate me now. On June 8th, Joe Armstrong will be presenting wines (and sake!) from his portfolio and on June 22nd Old World selections from Michael Skurnick's portfolio will be offered by sales rep, Doug Berenthal. Of course, I'll be present at both of these educational opportunities trying, as ever, to expand my knowledge. Maybe I'll see you there!
Posted by DelSo at 5:29 AM