I'll be honest here, the allure of Boston has always escaped me.  Perhaps it is because I grew up so close to the city, but, I've always failed to be impressed by Bean-town.  Admittedly, my experience with Boston is pretty limited,  I've probably been there less than a dozen times, but it is difficult for me to take that town seriously as a city. From my very first trip there, I've consistently floundered in my attempts to find a cool independent place for lunch or to shop.  Since my friend moved there though, I've definitely been to some areas which I've enjoyed like Newbury Street, Boston Commons, Quincy Market, the Children's Museum and, of course, the Aquarium.  I guess I just don't find it to be a particularly exciting city, but perhaps witnessing your baseball team's (almost) perpetual post-All-Star break choke is excitement enough for the natives. 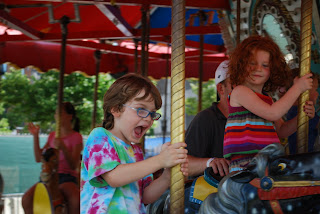 Since I do have a good friend there who is about to have her first baby, Q & I gave it another try this past week with decent results. We drove out Monday in the late morning arriving in Medford in early afternoon.  The heat, and the stage of my friend's pregnancy, dictated our limited agenda for the day, and we decided to take the train to Quincy Market for a walk around.  The T is definitely a convenient way to get around despite any lingering bitterness I may have following the U2 show we saw last year at Gilette Stadium, when we would have liked to have taken public transportation, but the T only runs when the Patriots are playing.  Apparently it doesn't matter that there might be nearly 70,000 concert goers because only football fans count.  Whatever.
Quincy Market reminds me of the South Street Seaport, and is a great way to spend an hour or two.  There are places to eat, shop and be entertained and Quinn certainly enjoyed himself.  The waterfront is close by and it is generally a nice area to walk around, but that is about all I can tell you.  I simply don't know enough about Boston.  And - that's where you come in.  Yesterday I got an email from TravelZoo with an offer to stay at a pretty decent hotel in Boston's Back Bay (wherever that is) for cheap - $139 a night.  I went ahead and booked two night for our anniversary, figuring I could finally explore B-town and try to develop some love, while also meeting the Clancy baby.  So...what do you suggest we do?  We'll be there Saturday - Monday and you know we like to eat and drink.  Please share your suggestions, which should not include the Red Sox unless they're playing the Yankees, and I will dutifully report back.  Thanks for your help!
Posted by DelSo at 11:04 AM