Although I didn't personally lose anyone on September 11th, 2001, I did lose a piece of myself.  A sense of safety and security, which I had been afforded in my position as an American citizen, was stripped from me that day, and I will never forget the reluctance I felt to close my eyes that night, and for many subsequent nights, because all I could see were the towers falling, falling, falling.  My husband and I had spent our anniversary, the previous week, in Battery Park and were so impressed with the liveliness of the neighborhood in an area known in earlier years as purely the Financial District.  That Labor Day weekend, it was a hub of activity with recreational ballfields in use, cyclists and families filling the pathways and a real sense of community present.  Beautiful.
The days following the terrorist attacks remain, for me, a blur of silent skies and roads filled with trucks pulling huge generators southbound.  I've met people in subsequent years who were much more directly involved with the events and their aftermath, NYC firefighters who can't sleep unless they pass out from alcohol consumption, individuals who lost loved ones, and I've imagined on many occasions the void thousands of families have suffered and my heart breaks for them. 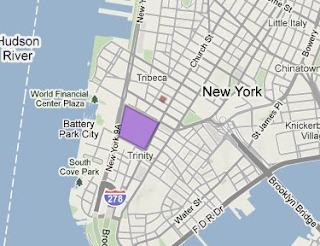 I don't often delve into the political here, but there's this situation which keeps escalating that I'm struggling with - this whole 51 Park thing in New York City, aka the Muslim Mosque or Community Center.  I think I understand the argument that just because "they" can build it  "they" shouldn't because it is disrespectful.  Build it someplace else, opponents say, a location not sacred, somewhere more appropriate - 2 full city blocks away from the perimeter of the World Trade Center site is not distant enough.  Permitting an extremist training camp (really?!) to be built in the shadow of the towers is perceived as an affront to families still raw from their losses nearly a decade later.  My concern, however, about what is being taught is directed more towards what our politicians, our media and our religious and educational institutions, are teaching our citizens.
Yesterday an intoxicated man entered a Mosque in Queens shouting racial insults and urinated on sacred prayer rugs.  Earlier in the week a 21 year-old man in NYC repeatedly stabbed a cab driver after confirming that he was, in fact, Muslim.  Isn't it possible that the  the construction of a community center, which is to be available to all, could improve relations rather than contribute to this escalation of violence we are currently experiencing?  Wouldn't this new building project be a positive contribution to NYC's economic woes?  And, can't we , as a nation, as a community, try to understand that an anti-Muslim stance benefits no one - other than the extremists grasping for validation for their views?  And the politicians trying to corrupt our intelligence by promoting fear as an ideology, of course.
I can't say it any better than this, but I certainly am receptive to hearing your perspective.
Posted by DelSo at 12:04 PM