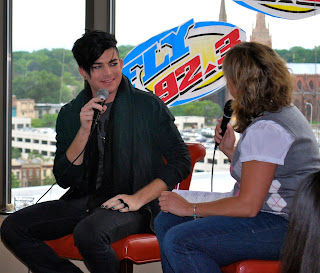 I watch American Idol.  There - I said it.  It may in fact be a reality show, on a network that can not distinguish the difference between bonafide news and propaganda, but it is something I can watch with the boys and be reasonably entertained.  Yesterday afternoon I went down to Dale Miller for a Meet & Greet with Season 8's runner-up, Adam Lambert, who was performing Monday night at the Palace Theater in Albany.  I've never attended a M&G and was unsure what to expect.  I'm not really into "bothering" celebrities and don't understand the value of an autograph or a photo taken with someone famous, but, in my continuing attempt to bring you all interesting material, the Nikon and I went.

The restaurant had put out a lunch buffet for the 60 or so attendees, and everyone filled the time eating and chatting with the friendly on-air personalities and staff from Fly 92, the promoters of the event.  Of course, Adam was late arriving and I had to re-feed the meter more than once, but I'm glad I stuck it out.  He was really warm and funny and came across in person exactly how he had on Idol.  The radio folks did a little interview and I was introduced to a new term which Adam had apparently coined a few days previously via Twitter: TongueDiving.  It seems that while performing in Providence (not Provincetown, but it probably would have been an equally receptive crowd), Adam had swapped some spit with a couple of concert goers during an instrumental interlude.
After the show, Adam tweeted that "TongueDiving is the new StageDiving,"  starting an outcry about appropriateness and acceptable performer behavior.  Oh, please, I'm sure the recipients of his enthusiastic affectionate attention weren't complaining. One of the funniest exchanges during yesterday's interview occurred when the djs grilled Adam on which celebrities he would be interested in practicing  this Tonguediving on -  Susan Boyle (no), Gaga (yes!), Tom Petty (no)... Adam's response to TongueDiving Justin Beiber was priceless, "No!  He's too young.  His tongue still needs training wheels." 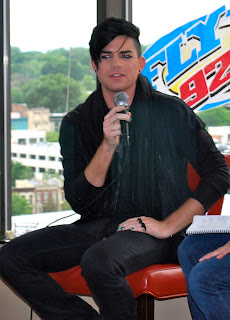 I didn't stick around to get my photo taken with him, but I am glad I went, if only to ear his sincere appreciation for the architecture of the Empire State Plaza.  I believe he used the word "fabulous," or maybe "fantastic" to describe our ESP.  It was definitely an "F" word and I know it wasn't the same one I use when I am forced to cross the frozen tundra of the plaza in the middle of winter to get to the Egg.

Did any of you go to the show last night?  Here's Steve Barnes' review from the Times-Union.  Looks like the attendees have some strong feelings about Adam, and last night's show, and are not afraid to express them.
Posted by DelSo at 2:18 PM