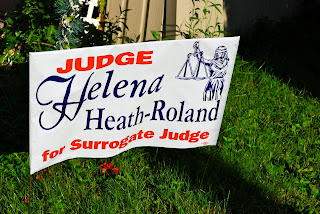 Earlier this week I went to drink vodka  an event to support City Court Judge Helena Heath-Roland's bid for a seat on the Albany County Surrogate Court.  You all probably remember that Judge HHR provided me with the letter "J" when I did the DelSo A-Z a couple of weeks ago and, in case you're unaware, she is a smart, compassionate and experienced judge who would do wonderful things on the Surrogate Court. Primary Day is September 14th - don't forget to vote!
The fundraiser was co-hosted by Matt Baumgartner and Tess Collins and was held downtown at Matt's amazing home.  There was a great turnout, plentiful and delicious food made by Shy, (the former cook at the Lark Tavern) who will be heading the kitchen at McGeary's, and lots of lovely Stolichnaya.  I had the opportunity to see some old friends, as well as meet some new people, including Albany Jane and Albany John, and I thoroughly enjoyed myself.

Matt's home is in an area of Albany that is more well known as a former industrial area  than a residential hub.  For those of you familiar with NYC, if you're wearing your pinkest rose-colored glasses, the sweet little street he lives on could almost be imagined as Albany's very own Washington Mews - it really does have that kind of potential.  As you would expect, Matt's place is filled with warmth and style and art and if he ever needs a dog sitter, I'd like to be considered for the position.
Now, about my ultimate plan for Matt to be mayor...it sure would be nice to have a mayor who developed businesses and had more of an interest in improving a place than in leaving a (Convention Center) mark.  Perhaps, if we all encourage Matt, and pool our Valium supply and make it available to him, he'll start taking me more seriously.  Until then, please support your favorite candidates in the upcoming elections.
Posted by DelSo at 8:08 AM