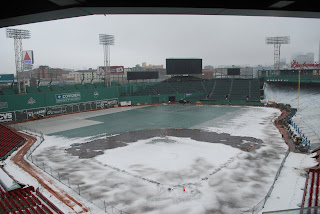 Although there isn't an appropriate box to check off on a census form, I have been in a mixed marriage.  You see, Tom is a Red Sox fan and I am a lifelong Yankee fan.  It really wasn't a problem for us since the two older boys had been equally divided. As is the case in most things, Quinn will be our ultimate wildcard once he pledges allegiance to a team.  I'll try to not lobby too hard and just hope that he has a natural affinity to go with the team that has a presence in my  hometown - Derek Jeter's mother is part of a large family which summered in GWL and he purchased and completely renovated their family compound a number of years ago, making him a Laker, just like me!  If you ever get to Greenwood Lake, N.Y. take the west shore road (Jersey Avenue for you non locals) and drive almost to the New Jersey border.  Make a left and you'll see his place on your right - and keep your distance please.  Celebrity stalking is so last year. 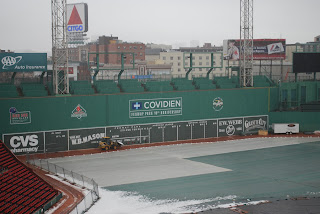 Rivalries aside, last week Griffin and I travelled to Boston for a quick getaway.  Ok, nothing is quick when it begins with an Amtrak ride (6 hours to get to Boston with the hour delay  factored in.  Really? 6 hours?), but it was a rather condensed visit.  We arrived late Thursday, dropped our bags off at our hotel and grabbed a quick, late dinner at the Capital Grille.  Friday morning, while Albany was getting hammered with snow, Boston was pounded by torrential rain.  Or, as I came to think of it, the tears of Thurman Munson were falling furiously upon us as I ventured into the enemy zone. 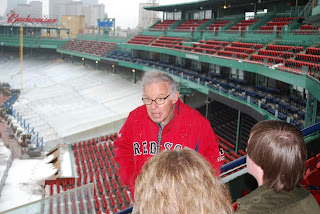 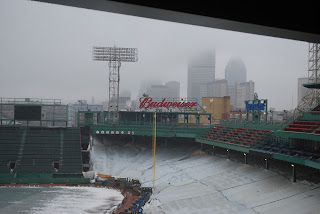 We arrived at the ballpark in the late morning and bought tickets for the 11:00 a.m. tour.  We met our rather colorful tour guide in the gigantic gift shop and allowed him to share his extensive knowledge of the team, the ballpark as well as some pretty bad jokes.  When I asked him if there was a bathroom nearby, (thinking there might be an electric handdryer which I could use to dry my soaking wet hair), he informed me that there might be a restroom mid-way through the tour.  We found a  common ground of humor when I told him I wouldn't be opposed to pissing on the field in a true emergency.  He assured me it wouldn't be the first time that happened and we were on our way. The tour took approximately an hour and included a walk around a good bit of the park and the chance to sit in some pricy seats on the Green Monster.  I have to tell you, it is a fabulous ballpark.  I've only been to a couple of major league ballparks over the years (neither of which still exist), so it isn't as if I have a lot of ballpark experience, but this place did feel special.    Our guide did a great job of being entertaining, informative and borderline inappropriate and I learned some cool things.  For instance, the numbers on the side of the exterior wall were not, as I teased Griffin, the string of numbers from Lost, but instead were the handful of numbers permanantly retired by the team.  These same numbers appear inside the stadium behind right field and if you were to enlarge the photo above you would see that the number on the far right, #42, is a different color than all the other numbers.  That would be Jackie Robinson's number - and it will be his number forever because in 1997 MLB decided to completely retire that number.  Pretty cool, right?
Despite the drenching rain and the uneasy feelings of disloyalty I experienced, I must tell you, I thoroughly enjoyed the tour and have nothing but respect for the ball field.  What happens on the ball field, however, is a completely different story.  Only 27 more days until opening day - go Yankees!
Posted by DelSo at 4:50 PM