Note: I've been writing some stuff which feels more creative than purely autobiographical.  What a relief, huh?  I'll probably post them in a series (running diaries chapbook) as they come to me, and I'll clearly identify them so you can easily skip them.
This running thing is taking on a life of its own, in a mostly positive, slightly obsessive fashion. As soon as I finish a run and start to cool down, I want to go again.  Just a quick mile, which for me, means 8 minutes, I think.  I don't really time myself unless I'm on the treadmill in the bad weather.  Anyway - I'm loving it.  It is great thinking and feeling and reflecting time.  Hey - maybe that's why I'm loving it so much.  It truly is me time.  Hmmm. 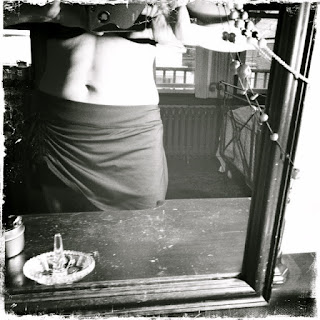 I was thinking about a blog post I had read recently about the enviable abs runners developed.  In the blogger's example it was female runners participating in a local event that attracts elite runners, the Freihoffer's Race for Women.  So I was thinking about how for the first time in my life, at the age of nearly 45, I would actually consider running without a shirt on.  I think I have abs.  Actually, I know I have abs because my 12 y/o son just told me I was "beast."  That's good, right?
I was less than gracious recently, in a tweet about the blogger who wrote the post that inspired me to consider the condition of my abs.  I've been thinking about how I have 10 years, 3 kids and 2 cancers under my belt, perhaps held in by strong abdominal muscles, and that maybe I might have been perceived as self-absorbed at certain points in my life.  Like now, when I am willing to work harder than ever to have a life which not only looks full, but feels full.
Posted by DelSo at 8:17 PM