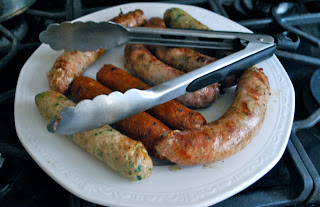 Family dinners remain an important part of life for all of my family so for Dad's Day the plan was a shared meal on the deck.  And what a spectacular day it was!  The menu was cobbed together (with duct tape! Isn't that how Dads do it?) kind of last minute, but I did have the forethought to take some sausages which were leftover from Sausage Fest 2011, out to thaw. I grilled the sausage and then they were cut into rounds, toothpick speared (doesn't everything taste better when eaten off a toothpick?  So festive!) and served with some spicy mustard as an appetizer. 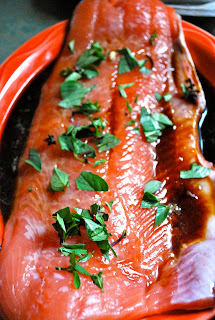 The meal included both a pork tenderloin and this beautiful piece of wild salmon.  Price Chopper had the fish on sale for cheap and I bought 1.5 lbs of it.  I marinated it for a short while in soy sauce with some coarsely chopped thai basil and then grilled it up.  I must say, it was delicious and I'll probably pick up another hunk of it later in the week.  I rounded out the table with the skinniest asparagus I've ever seen and a bowl of yellow and orange lentils which I had cooked in a quart of chicken stock and then seasoned with garam masala and salt.  As a finishing touch, I chopped some flatleaf parsley and tossed that into the lentils as well.  Do you eat lentils?  I suspect they are going to be my next obsession.  All of this delightful food was washed down with a bottle of Gruet and a '99 Chateauneuf du Pape.  Family, friends, food, wine...yet another lovely Sunday evening.  Hope all you other fathers out there were feted as well.
Posted by DelSo at 6:39 AM