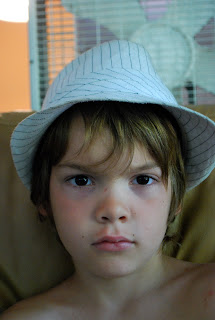 Fellow librarians will be disappointed to discover that I am not going to devote a DelSo post to CQ Researcher, a fantastic reference tool published by Congressional Quarterly.  I am most certainly an enthusiastic fan of the database, however, the topic today is Quinn and his current phase of curiosity, particularly about life and death.

While we were away earlier this month, Q showed an interest in Cleo, a dog I had for a good chunk of my late teens and through my entire 20's.  When it was Cleo's time, I decided that having her cremated was the way to go.  I even paid extra to have her privately cremated to ensure that the plastic bag of powdery ash and disconcertingly large bone pieces were hers and hers alone.  For the past 12 or 14 years she has resided in a covered piece of pottery on a bookshelf, still spoken of occasionally but gradually becoming eclipsed by Cassidy Bono Lilly, our family's 10 year-old lab.  Quinn wanted to know what happened to her after she died and I decided to be honest and explained the process of cremation and told him where she was in our house.  I think I may have had a single day home, after returning from the beach, before Quinn picked up the conversation again and asked to see her.  So, I took the pot down off the shelf, opened it up and gave him a good look at what remains of Cleo.  For those of you at home, here's the unopened crypt: 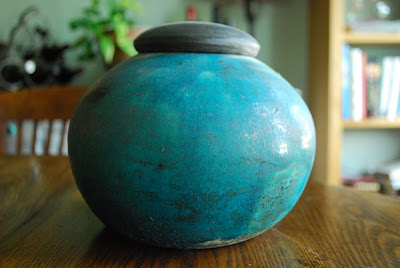 Not a bad final resting place, although I have instructed the Lilly boys that I would prefer my ashes to eventually be scattered in Greenwood Lake, the Hudson River, and the Atlantic off the coast of Wellfleet.  No rush on that, by the way.  Quinn's curiosity seems to satisfied for the moment because he has an interest now in eggs...
Last week he asked me if I had anymore eggs - an odd question from a child who doesn't eat them fried, poached or scrambled.  "Of course," I said, "They're in the fridge."  "No, not those eggs," he replied. I sat down with a little sigh.  I knew where this was going.  Apparently he was wondering if I had anymore baby eggs because he wants a baby sister.  Now, believe me, if he had any idea how many of those baby eggs it took to get him, I imagine he would have shown a bit more sensitivity in his request - especially since he was supposed to have been the baby sister to the two older Lilly boys.  I think the only way I eventually got out of that conversation was by pointing out that his neighborhood friends had a new baby sister at their house and that they just might be willing to share her with him.  (Sorry, Maisie, I think he'll be gentle.)  And, when all else fails and Curious Quinn threatens to be relentless in his pursuit of knowledge beyond his years, I've discovered a surefire way to silence him, albeit on a temporary basis.
Posted by DelSo at 5:32 PM