or perhaps I should say two admissions.  This weekend, for the first time ever, I agreed to be described with two adjectives I generally wouldn't use to describe myself.  At least not publicly.  The first was at a party last night.  The house was cozy with food and beverages and many familiar faces.  It was a nice party and I'm glad I forced myself out of the house, despite my secret desire to cozy up in a cloud of cashmere and watch a Netflix which I'm suddenly paying $30 a month for..huh?
Anyway, it was nice to spend some time with two of my fellow Vinoteca bloggers and I was frequently introduced by my co-writer (correct term?) and hostess, Claire, as a blogger.  I was asked a question I had never fielded before - "Why do I blog?"  With only a nanoseconds hesitation I responded: "because I'm a writer."  I don't even think I blinked.  And, I didn't even backpedal or attempt to qualify what I meant.  Damn. 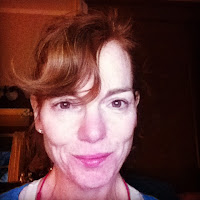 Today I ran a modified version of the route for the Last Run, something I'll try to do one more time pre-event. Even though I never aspired to have a running partner, I thoroughly enjoy running with Chrissy.  It's awesome.  I've relented a little on my no-talking-while-running-stance and today we were talking about another woman runner, and I described her as a "serious runner."  Chrissy looked at me and said "Like you.  You're a serious runner."  Gulp.  That one was harder to swallow than the writer tag.  Maybe because running is newer, (I've been blogging here for almost 2 years!!) I'm not yet accustomed to belonging in this runner lifestyle.  You know me, I've embraced being illegitimate - it's what I know.  Smile.
In the car on the drive home, Chrissy and I talked about living in the moment as the ultimate expression of peace and balance.  Recognizing different parts of one's self is  an acknowledgement of who we are right now and, knowing who one is, is always worth the price of admission.
Posted by DelSo at 5:35 PM