The Art of Running in the Rain

There was a time when I only was able to run on flat roads. I sought out routes that consisted of level surfaces avoiding even the slightest incline. Then I ran in the hills of Palm Springs and realized that scrambling over rocks and gaining elevation added to my running joy. I began to incorporate hills into my runs and grew stronger. 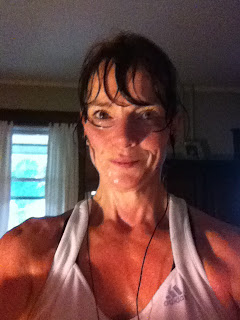 I used to allow the heat to discourage me from running. As the temperature increased, my interest in adding my own sweat to the pervasive humidity that is upstate New York in July, diminished and I easily abandoned my intentions to get some exercise. But then I discovered that a steady pace, and the relative coolness of the evening, allowed me an opportunity to stretch my legs despite the heat and my opportunities for running grew broader.  Running in cold weather and precipitation never held any appeal for me. I'd see those people out there and conclude that they must be crazy - plain and simple. And then the day came when I was committed to getting a run in and the weather did not cooperate. I considered my choices:
We've known each other awhile now (2 years, but more on that in a future post).  Guess which option I went with?  As I parked my car on State Street on a rainy, dark early evening I was utterly convinced that I was in for a miserable time.  It was cold.  And wet.  Really wet.  I started walking down the block past the Capital and something happened.  Maybe it was the song in my ears or the holiday lights in my face, but I suddenly felt good.  Really good.  I was struck by a thought - what's so damn bad about feeling the elements?  I had the advantage of adequate attire and the promise of a hot shower to follow.  I wore quality running shoes and was fairly familiar with my intended route.  I knew that once I was completely soaked I couldn't get any wetter, so why not just yield to the experience?
It was amazing!  I ran up Washington Avenue in a mercifully quiet rush hour, due probably to the weather.  I observed the shrinking Occupation and silently thanked them for their efforts.  When I approached Washington Park, my body felt warm and the festive, and charmingly corny, light display invited me for a private tour.  On foot, of course.  It was perfect.  The course I took, which was a modified version of the upcoming Last Run, finishes with nearly a mile downhill.  By the time I hit Swan Street, I'm practically at a lope, and by Eagle it's a full out canter.  Fully engaged and present - just about exactly where I want to be.
Posted by DelSo at 11:39 AM