When I first began running after my shoulder surgery, it was winter and I made use of the treadmill at the gym. I really had no complaints about the experience. I could listen to music, watched muted Home and Garden television and people watch - all at the same time without tripping. I was motivated by the display screen and played around with the incline and speed, watching the calories count off. Actually, it was probably one of the few times I considered myself to be a numbers person. I never really understood the blanket dislike of running on a treadmill, I mean, what's so bad about running like a hamster in a cage?  For outdoors time, I had the golf course for cross-country skiing. Remember when it used to snow here in the winter?
In the past couple of months, though, I've found myself  beginning to understand the disdain for this type of exercise. Maybe it started at the Greenbush Area YMCA where they have televisions mounted from the ceiling rather than individual screens on each machine.  It might have been the incessant FOX "news" assaulting my eyes that first turned me off to running as fast as I can without creating any distance between myself and something I find repulsive.  And if it wasn't that, the episode of Paula Deen "cooking" with canned mushroom soup and multiple sticks of butter certainly was enough to make me uncomfortable.  Gross.  But, I believe my major issue with running on a treadmill comes from the basic fact that I simply enjoying being outside.  In recent months, I've actually had a couple of moments when I've been running and I thought to myself, "If it all ended right now, I'd be happy."  I've never replicated that emotion indoors on a treadmill, believe me.
Quinn and I are preparing for our epic train trip later in the month and I'm a bit stressed about getting my weekly miles in.  I'm hoping to cob together some sort of babysitting when we're on the road and I'll bring a swimsuit also, just in case.  Last week when I was in Boston, the hotel had a running concierge - have you ever heard of such a thing?!? Apparently it is a weather dependent service, but I thought it was a really cool amenity to offer guests.  The timing of it didn't work for me, but check this out: 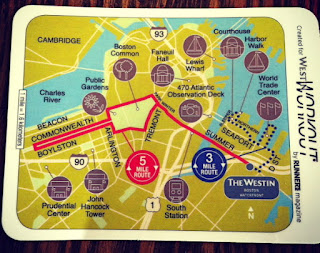 Now, granted, it was Boston and I always get lost in Boston, but it was an awesome little map nonetheless.  As I try to push my weekly mileage closer to the 20 mile mark, my acceptance of a lack of snow, (and thus no cross-country skiing), feels far more natural than running indoors.  Let's hope D.C., Baltimore and NYC offer opportunities similar to Boston or else the only thing more dreadful than the dreadmill will be my mood.
Posted by DelSo at 1:08 PM