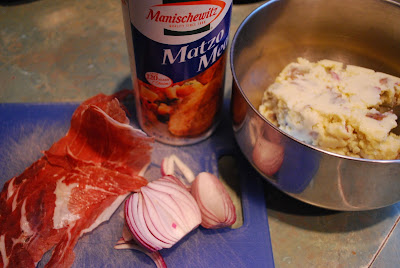 If I were a superhero (I'm not one, I just play one in real life) my name would be Coquette Woman and one of my super  powers would be my ability to make something from nothing, specifically something tasty from seemingly disparate leftover ingredients. Case in point: these breakfast potatoes. I was staring hard at a container of leftover mashed potatoes when I realized they were begging me to turn them into potato cakes and as I was considering their plea, I started to hear the (sadly) dried up prosciutto and half a red onion ask to join them. Here's what I did to make all of us happy... 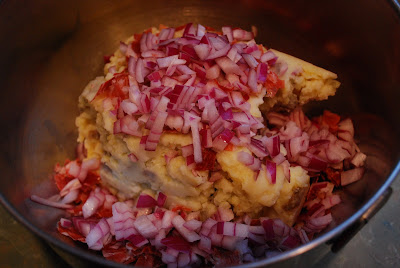 I chopped the onion and prosciutto and mixed them by hand (literally) with the leftover mashed potatoes.  Note: the reddish bits on the potatoes are the skins.  I almost never peel potatoes.  After mixing the onions, prosciutto and potatoes, I shaped the mixture into "cakes" that were basically the size of a generous crab cake.  I dipped them into a lightly beaten egg and then dredged them in matzo meal.  Bread crumbs or panko would work just as well, but matzo meal is what I had on hand and this exercise in cooking revolved around using what I had. 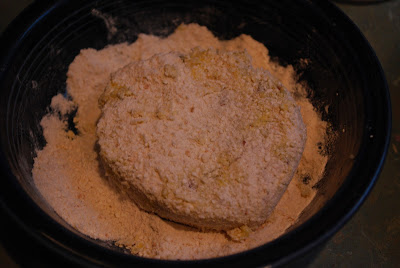 Next up - frying!  I heated some vegetable oil until it was hot enough to cause the potato cakes to make that lovely sizzle noise as I placed them in the pan.  I browned them on both sides and then moved them to a moderate oven (350) for about 20  minutes.  The time in the oven is completely discretionary - they were ready sooner than 20 minutes and they could have stayed in the oven longer.  It was just what worked for me. 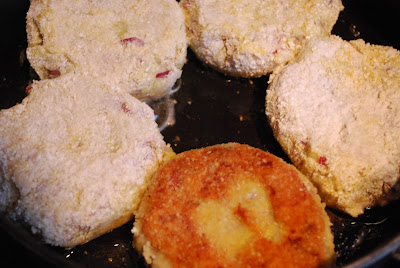 The potatoes became the base for a couple of softly poached eggs. I finished the plate with salsa, avocado mashed with a bit of sour cream and cumin and toasted no-knead bread. Yeah, I baked that beautiful bread - by the way, that's another of my super powers. Coquette Woman saves the day with a tasty meal and once again thwarts the compost bin by using an array of leftovers creatively! Pow! 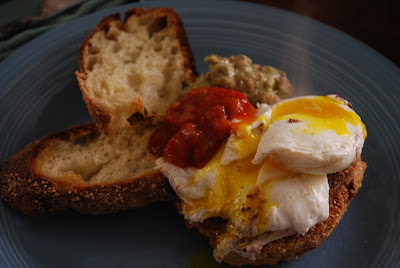