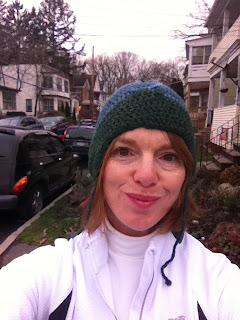 We've already established that Thanksgiving can mean a lot of things to different people For some, the holiday tradition may include a physical activity to  stimulate the appetite or to help eliminate some stress. There are a number of morning races in the region, but I opted for the Delmar version because it is fairly new and thus, not too crowded.
I got to bed pretty late Wednesday, after working more hours in a single day than I had cumulatively slept in the previous three nights. Surprisingly for me, I wasn't particularly nervous pre-race, no jitters at all other than the frequent peeing kind. Come on - that happens to you, too, right? I was in good spirits as the holiday dawned and was very comfortable as I started the run.
There wasn't official timing available but I borrowed a friend's watch and did some self-timing. The start was rough because of general bottle necking and the presence of many dogs and strollers. I'd estimate that the first 1/3 to 1/2 mile was mostly spent positioning myself at a comfortable pace. My first mile was a decent enough 9:17, my second was slightly quicker and then I forgot to time my third. I felt pretty in the zone, though. After running the golf course a couple of times a week recently, the flatness of this course was a real lack of challenge treat. My finish time was 27:30 which shaved 40 seconds off my last race time and previous personal best*.
The race was really fun and I completely enjoyed seeing former and current students, silly costumes, and turkey fryers at the ready in a number of front yards. There was typical  enthusiastic Delmar support from spectators and I loved seeing the families and groups of friend running together. (Sorry, Donna!  Next year we'll stick together or at least have a plan to meet, post-race.)  Next up is the Jingle Jog at the Crossings in Colonie on Saturday, December 3rd. I'm looking for two more bib numbers before the end of the year which will make 2011, by far, my most productive year of running.
*sounds way less uptight than "personal record," don't you think?
Posted by DelSo at 8:00 AM