The Sound of Silence

My little corner of the DelSo is fairly quiet. The street I live on doesn't "feed" directly out to Delaware and the previously popular cut through to avoid the light on the corner of Whitehall and Delaware, was cut off prior to my moving into the neighborhood. Occasionally, there's some noise made when someone hosts a party (sorry!) but generally things are pretty tranquil in our little piece of heaven. Except, for in the summer, of course, when windows are thrown wide open. Then we hear the constant drone of traffic on the thruway.
My street is a couple of blocks from 87 and the sounds I generally hear are more a hum than a roar. I imagine living closer, though, might be a different story. I don't know if it is similar to living across the street from a firehouse, something my family did for a year when I was in elementary school. I recall becoming so used to the sounds of sirens and trucks that I no longer registered them as an interruption. Probably not ideal in case of emergency, right?
Anyway, there's been some activity on the thruway for the past couple of months.  I initially assumed an additional lane was being built (which may still be in the cards) but it looks like it's going to sound a little different here in the DelSo..
...because we're getting these cool sound muffling walls. I think they look pretty good and I hope, for the sake of my neighbors who live ever so close to that busy road, that they sound even better.  It will be interesting to see what things sound like next summer.  And, let's hope these walls remain untagged, or at least graffitied by someone other than a Lilly boy and with some artistic talent. 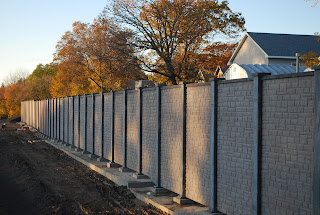