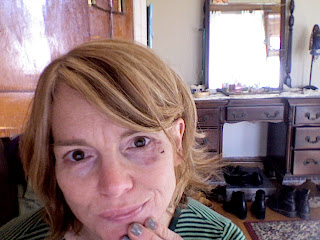 After my recent week away, I felt compelled to accomplish some household chores over the weekend.  Now, you know I believe that nothing says welcome home like clean sheets, but you may not know that I have a fondness for taking baths.  In a clean bathtub, naturally.
Seeing as how I'm the only person who has ever cleaned either of the two bathrooms in my house, I got right on that task Saturday morning.  I even utilized all of my favorite tools - scrubbing bubbles, abrasive cleanser, window cleaner...When I stepped into that shower a short while later it was clean.  Unfortunately, I stepped in with a little too much haste and immediately lost my footing, slamming my face on the top of a shampoo bottle to stop my fall.  Ouch - it really hurt!  And not just because it was the cheap inexpensive Suave brand stuff.  I've accepted that the Fekkai would have caused the same pain, right?
I'm not really good in medical situations, so I avoided looking at the damage(s) until I was safely out of the shower.  And dressed.  There was blood, but not too much and I didn't think there was a need for medical attention, or even ice.  (I hate the way ice feels - give me a heating pad any day.)  I posted a picture on Facebook in the hopes that I could immediately subtract 579 from the grand total of times I would need to tell the story of my injury, but it has led to an interesting week.
Some observations from having a black eye... I often forgot that I had a glaringly obvious injury, at least until I noticed someone awkwardly staring at my face.  Once that happened, I immediately launched into my story, tossing in a joke about "walking into a door" and how I "wasn't going to date Chris Brown ever again."  The situation usually was smoothed over after a giggle or two, but there definitely was a residual sense, call it a bruise if you'd like, of discomfort. The Rihanna/Chris Brown bad romance brings me to my next observation, but it's one you should be making about me.
At the risk of protesting too much, do I strike (ha!) you as the kind of woman someone who would ever tolerate abuse*?  When have I ever permitted anyone - male or female, to take unfair advantage of me?  Please.  Just because I reveal my bruises doesn't mean I have more of them than anybody else.
*When I was 19 I was involved with an asshole a guy who slapped me across my face. Once. I have friends who were physically abused by their partners and I am completely sympathetic to the realities of domestic violence. It isn't a joke to me, but I also know from experience that I did not, and would not, allow anyone to physically abuse me. I hope that those who are victims find the means to seek help. Here's a resource for those in NYS.
Posted by DelSo at 5:50 PM