When I placed my order at Falvo's for my Christmas Eve ham, I decided to add another something special for the boys' dining pleasure - and my convenience, beef short ribs. I don't know much about these succulent hunks of tender beef other than I prefer them when they are on the bone and that, until recent years when they became kind of trendy, they were always a bargain cut of meat. I paid $5.19 a pound and bought "8 bones" to feed three boys and myself, with leftovers. 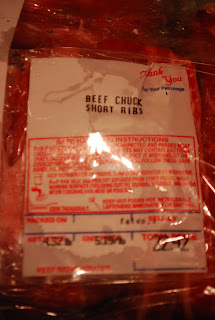 The natural method of cooking these beauties is braising or in the slow cooker. I began by dredging them in flour and browning on each side in a splash of olive oil. 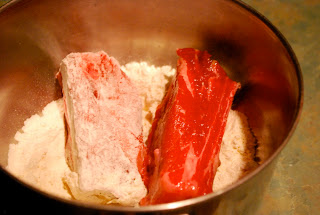 I did this in small batches and placed them in the crockpot as they finished. When all of the meat was browned, I deglazed the pan with a combination of red wine and beef stock, allowing it to reduce slightly. 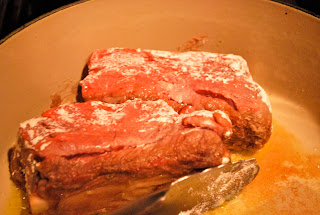 I added some baby carrots and onions to the crockpot along with fresh rosemary and some small whole garlic cloves. I turned the crockpot to low and cooked them all night, waking intermittently and thinking to myself "Oh my goodness! What is that delicious aroma?" 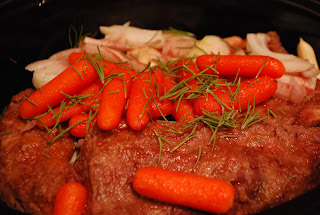 In the morning I removed the meat and vegetables with a slotted spoon and placed them in my Le Creuset in the fridge for the day. I wanted a chance to skim off the substantial fat the ribs had released, so the "gravy" went into the fridge as well. An hour before dinner, I poured the de-fatted gravy over the ribs, covered the Le Creuset and placed them in the oven at 325. 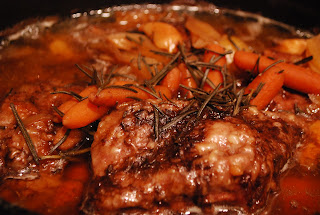 Dinner is served! Aren't they gorgeous? This is winter cooking at its finest - hearty, fragrant and reminiscent of simpler times. Try this and thank me later.
Posted by DelSo at 9:09 AM