While my appreciation for Thanksgiving is boundless, I was at the end of the line with bountiful leftovers. Inventorying my fridge, I came up with a few chunks of sweet potatoes, some mashed potatoes, a small amount of sautéed mushrooms from Saturday's strip steak meal and some gravy. I thought I had some turkey, but other than a lonely drumstick, that had all been consumed by my "good eater" friend, Peter. Since I was mentally committed to preparing some comfort food, and I am master of the creative use of leftovers, I decided to make use of a couple of chicken breasts instead. The end result of my ridiculously easy efforts may have been the best pot pie ever! 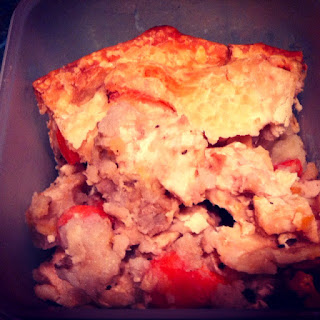 Here's my technique: Unroll a crust and place it into a deep pie dish - or be all overachieving and make your own dough for a two-crust pie. Combine an assortment of vegetables, meat and liquid (more about this in a minute) and place in pie crust. The amount of liquid varies and unfortunately, I didn't make any attempt at measuring. I generally try to balance the liquid (gravy or broth) with the mashed potatoes to create a balance between moist, yet able to retain its form when cut into. In addition to using my gravy for inside the pot pie, I made use of it as a kind of "poaching" liquid, cooking a couple of chicken breasts in it due to my lack of turkey. I can't say how long I let them simmer in the gravy...maybe 20 minutes or so? Once they cooled off a little, I cut them up into bite-sized pieces and added them to the vegetables already in the crust, along with some par cooked some baby carrots. I checked my ratio of solid to liquid, thinking that the gravy should reach about the halfway point in the pie dish to ensure a steamy deliciousness when cut into. Check.
At this point, I showed my oldest son what I was making and he immediately dubbed it "Thanksgiving Pie." Fine. If that's what you want to call it, go right ahead. I topped the gorgeousness with the second crust and rolled the edges together and did my best to make it look presentable. I've mentioned before that crust is not my thing, right? I cut a couple of slits in the top to allow some steam to release during baking, and placed my pie in the oven at 375 degrees. I again remembered to place a baking sheet on the rack below my pie to catch any errant drips - yeah, me! After about 30 minutes, I increased the temperature to 400 and gave the pie another 15 or 20 minutes to finish getting all brown and pretty. I then called my neighbors and asked if they were hungry...
While I took a quick shower, I let the pot pie cool a bit and settle. Freshly washed, I grabbed my pie, some arugula and a lemon, and headed next door for an impromptu Sunday DelSo dinner with Ken and Lori. Their wine, my pot pie and salad, and another satisfying weekend drew to a close. Life, my friends, is good. Get some!
Posted by DelSo at 4:32 PM