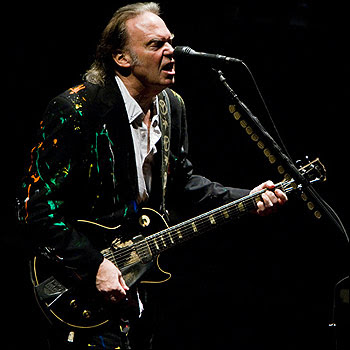 There are certain things in life that I will always think of as belonging to someone else and therefore unavailable to me. For instance, the Tolkien books were always my brother's thing and thus I never read them. Thank goodness for Peter Jackson's films otherwise I would still be in the dark about such things as Frodo, Gandalf and the importance of that damned ring. There's also some music that I so strongly associate with individuals that I resist adding it to my collection - sometimes because I simply don't like it (sorry, Tom, Frank Zappa will never be on my ipod), but more often because I would feel awkward about "stealing" it. Unless, of course, I was literally stealing the music, like the time I took every one of Aloysius' Ricki Lee Jones cassettes that I could get my hands on, just so he would stop playing them incessantly.
For many years Neil also belonged to Aloysius. He had older siblings who refined (created?) his musical taste and was definitely ahead of the curve (or maybe a flashback behind the curve?) on the Neil Young love. I remember the urban myth about Aloysius seeing Neil at the Garden and joining him from the audience on a harmonica solo - probably not true, but lovely to imagine. For me, though, Neil somehow was different; he was available. Perhaps because he had had so many incarnations through the years, I somehow didn't hesitate to embrace him as my own. Over the years, I've been fortunate enough to see him a number of times, once with C, S & N, a couple of times with Crazy Horse, and also solo. He is amazing! Watching him play guitar, stomping his foot and nodding his head, it is pretty clear that he birthed grunge. Probably without pain medication and with forceps.

A couple of Decembers ago, I went to see Neil at the Garden. Sarah had bought 2 tickets for us as an extravagant Christmas gift. It was so fun to be back in the Garden after a 20 year absence and the show rocked, despite the fact that our seats were total nosebleeds and the crowd around us barely registered a pulse. After the show we walked up 9th Avenue, occasionally stopping to warm up until we found ourselves at Kennedy's.

As we settled in to our last stop, enjoying our conversation with some Irish ex-pats, a new group filtered in. And they each had lanyards with all access passes to Neil Young - they were roadies! We hung out with this fine group for a couple of pints and had a great time talking music and shows. The evening ended with their promise to guest list us for the next night's show - and they really did! The second night's show was enhanced by our stage side "seating" and the addition of Aloysius, because when Mark asked how many tickets we needed, I immediately thought of Aloysius. This is where the Karma comes in to the story. Seriously, what are the chances of meeting Neil Young's lead sound engineer, getting guest listed and having one of your oldest friends, a friend who basically gave Neil Young to you, passing through NYC on his way from LaGuardia Airport to New Paltz, join you for the show?? It really was that spectacular.

The only way this story can possibly get any better is if our sound engineer friend, Mark, is able to hook us up for the Palace show next month. And if Neil and Mark let us make them dinner. To be continued...
Posted by DelSo at 9:34 AM