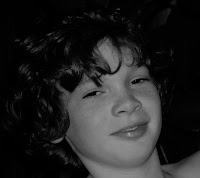 Eleven years ago today, after a seemingly endless labor, Griffin Hudson joined our family. The birth of that boy was one of my proudest moments; an affirmation that I could, in fact, deliver a healthy, full term baby. Unlike this year's premature version of spring, that particular spring arrived simultaneously with our new baby. I remember driving home from St. Peter's on Hackett Blvd, and seeing that all the tulips had popped open, mimicking somehow the birthing process I had recently experienced.

While Liam had been a placid baby, Griffin was demanding. He didn't spend more than a dozen nights in his crib and refused to cry himself out. The only place he contentedly slept was in our bed, so we caved and allowed it. I understand that all the baby books say that this is "wrong," but I know that this physical closeness created a child who loves giving and receiving affection. I remember once waking up in the middle of the night and rolling towards him, only to see that his eyes were wide open, burning like embers as he stared at the ceiling. He is an an old soul and has caused me on more than one occasion to consider the possibility of reincarnation. And since he has a history of struggling with telling the truth, I suspect his current life may not be his last.

I feel deeply connected to each of my children and can't yet imagine the day that we no longer share the same roof. Griffin and I have a special connection because I honestly know how his mind works. It is weird, but I can often see what he is thinking, which definitely impacts his ability to lie to me and get away with it. Although I think he resembles Tom the most of all our boys, he is the one, I believe, is most like me in personality and temperament. And that's no lie, despite the fact that he likes hugs.
Posted by DelSo at 8:20 AM