Over the years, the girls and I have met in many Hudson Valley towns.  Woodstock, Saugerties, Rhinebeck, New Paltz and Kingston come immediately to mind as locations which have witnessed our antics as we attempt to squeeze in all we wish to share - thoughts, experiences, illicit indulgences, a meal...whatever.  It would be fair to say that we, as a collective group of very old friends, have been around, yet, there's always something new to see or do, as our adventure this weekend readily proved.  Have you been riverside in Kingston?  Wow! 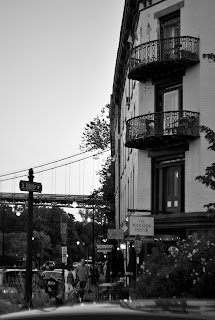 As I said, we've been to Kingston before and enjoyed it, but our explorations were in the area surrounding the original State Capital, sort of uptown I'd say.  This time though, we (ok, me, but I'm the one who is usually responsible for sussing things out) had a hankering for Mexican and Mole, Mole at 23 Broadway had some positive comments on Yelp so we decided to give it a shot.  The part of Kingston where my Google maps brought me was completely new to us, but it has obviously been developed for centuries.  The hill which lead us down to what seemed to be an inlet for the Hudson, was a broad street with brick buildings on both sides, some commercial, many residential. In addition to the restaurant where we ate, there were a number of other options for dining, including a place I had heard of for years, but had never seen - Mariner's Harbor.  Based upon the Yelp reviews, I don't imagine I'll be eating there anytime soon, but I now know where it is.

Our destination, proved to be a winner!  We gathered at the bar, as we were 4 girls arriving in 3 cars, and got started with margaritas - all made with fresh juices and a steal at $5.  I went with the passion fruit and it was tasty with the salt rim doing a perfect job of balancing the sweetness.  Almost scary easy to drink - you've been warned.  The staff was great - welcoming, cheery and competent, and our server helped us order an appropriate number of dishes for 4 tequila swilling hungry ladies. We went with a salad and quesadilla to start, and then three entrees; pork, chicken and shrimp.
Let me tell you, this place was perfect.  The food was fresh and nicely presented, the atmosphere was comfortable and fun and  we had a blast.  Our meal, including 5 or 6 margaritas came to an incredibly reasonable $102 and we were more than satisfied with everything.  The location is great for a post-meal walk and we loved checking out the buildings, both occupied and vacant.  At merely an hour's drive from Albany, we'll happily plan a return visit for later this summer, maybe arriving earlier to check out some of the shops which had already closed.  Very cool, very close.  Go!