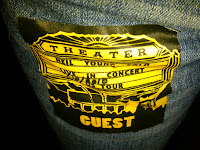 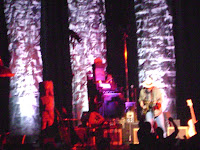 You know I worship Neil Young and I'm all about hanging out with my friends, having some food and drink (delicious pregaming @dp's!), and then going to a show, which made Tuesday night an almost perfect night. Oh, what the heck - it was perfect, once security ejected the moron, perhaps suffering from drunken Tourette's, a couple of rows behind us. During the entire opening act (Bert Jansch) he kept yelling "Neil. Where's Neil?" and unfortunately he persisted in expressing his idiocy even when Neil was on stage. Good riddance - and good luck with that lawsuit you and your bride threatened to pursue against the Palace.
Neil Young opened his current tour, known as the Twisted Road tour, in our fair city and I was fortunate enough to be there. There are many reviews of the show available online but all I can say is permasmile. My face actually ached from the smile pasted upon it for the 90+ minutes Neil was on stage. Magnificent. I think the ultimate moment was After the Gold Rush on organ - it was absolutely breathtaking. My only minor complaint about the night was the fact that I felt pressured to sit down when all I really wanted to do was stand up and dance, but, that's the difference between an arena show and a theater venue, I suppose. And for those people who complained about the price of the tickets, did you notice all those people who work for Neil? Well, I imagine they all get paid, as well as travel expenses, transportation, etc. If the Palace has 2844 seats (which it does) and tickets were an average of $125 each, that means about $35,000 coming in as revenue and honestly, that doesn't really seem like that much money to me. Or Aloysius.
While Neil did not come to my house for a home cooked meal, I was able to put a couple of growlers of local beer into the hands of my sound engineer friend, Mark, as an attempt to thank him for the sweet hookup that put Tom and I in seats right behind the sound board. The karma train continues along its musical tracks...
Setlist
1. My My, Hey Hey (Out Of The Blue) (acoustic guitar)
2. Tell Me Why (acoustic guitar)
3. Helpless (acoustic guitar)
4. You Never Call (acoustic guitar w/ pickup)
5. Peaceful Valley (acoustic guitar w/ pickup)
6. Love And War (acoustic guitar w/ pickup)
7. Down By The River (electric guitar - Old Black)
8. Hitchhiker (electric guitar - Old Black)
9. Ohio (electric guitar - white falcon)
10. Sign Of Love (electric guitar - white falcon)
11. Leia (upright piano)
12. After The Gold Rush (pump organ)
13. I Believe In You (grand piano)
14. Rumblin' (electric guitar - Old Black)
15. Cortez The Killer (electric guitar - Old Black)
16. Cinnamon Girl (electric guitar - Old Black)
---
17. Walk With Me (electric guitar - white falcon)
18. Hey Hey, My My (Into The Black) (electric guitar - Old Black)
Posted by DelSo at 5:20 AM