Have you ever ridden your bicycle for 50 miles? Well, I have - almost 3 times. The "almost" was my first attempt at the distance in 2008. I'll show you the evidence of my failure sometime - my separated right shoulder, if you're interested.

Yesterday, Tom & I, along with a number of other teachers in my district, rode to raise money for Brain Tumor Research. This is the second year we've done this particular ride, but last year we did the more manageable 25 miles. Just so you know, going from 25 miles to 50 is like going from one child to two. It doesn't simply double the effort required, instead some weird math thing that I could never understand occurs, and it multiplies everything by about x to the 10th power or something. But, this isn't about math, this post is supposed to be about what an amazing bike ride we had yesterday.

To begin, the weather was absolutely spectacular - blue skies, light breezes, temperatures in the high 60's to low 70's. Perfect bike riding weather. And the route? Gorgeous rolling hills, panoramic views of the mountains and Saratoga Lake, beautiful homes and horse farms... If I were a horse, I would definitely want to live in Saratoga County. The ride included a 10 mile loop through the Saratoga Battleground, which I've never visited before, and it was like a history lesson on two wheels! The landscape below was taken from a vantage point in the park, and I imagine the view hasn't changed much since we were fighting the British. And, thanks to the hippie rider in the Hendrix jersey on the purple (microdot?) bicycle for giving us the heads up on the photo op. Good call, dude! 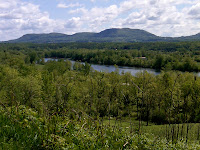 A couple of things I've learned on these long (for me) rides which I'd like to share with you:
Posted by DelSo at 6:41 PM