Prior to our trip to Italy, I organized a special meal for Tom's (never-ending)birthday celebration.  While we had originally hoped to have someone come to our villa to cook, it made more sense for us to travel a bit down the mountain to our chef's villa so she would have all of her utensils and cookware available.  Although Tom's actual birthday was Monday, I decided that Sunday made more sense as most businesses are closed Sundays and we would looking forward to having a very mellow day after our previous day's travel exertions. 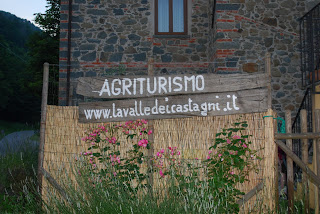 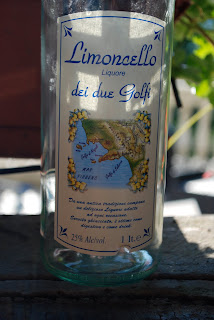 Our hosts, Lisa and Roberto were lovely. Our party of 8 arrived around 7 pm and were warmly greeted by a trio of Labrador retrievers and some pretty nice humans, too.  Our alfresco table was charmingly set, complete with Ikea flatware,  and we (adults) settled in to partake of the traditional Tuscan meal being laid before us.  The meats and produce were all local, some actually were specifically from (grown and/ or raised )in the gardens and fields surrounding the property.  The wines, both bianco and rosso were from the nearby village of Montecarlo where they apparently are cooperatively produced and bottled/bagged.
There has been some recent "discussion" on a couple of local blogs regarding the value of promoting restaurant ingredients as being local.  Well, at this place I suspect that every item being served came from within a 25 km radius of the villa.  The menu included prosciutto, a fantastic lasagna of the lightest pasta with both a bechamel and a meat sauce, a wonderful panzanella salad and sliced beef.  I'd give you more details, but, unfortunately my jet-lagged brain failed  us both.  We finished with tiramisu and the tastiest limoncello I've ever had.  I mean, it was so delicious that we asked for the remainder of the bottle to take home.  And then bought 2 more bottles (for $6 each!) to bring home in our luggage. 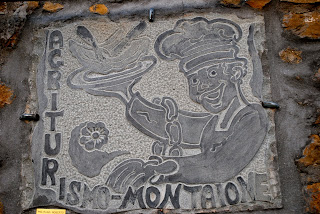 On our final evening in Tuscany we wanted to again enjoy a locally produced meal together.  Our villa had come with a binder filled with suggestions and one place in particular caught my eye -  Agriturismo-Montaione.  This remote restaurant was described as serving organic, traditional cuisine and we thought it would be the perfect ending to an idyllic week.  We spent the afternoon that last day tooling around, checking out neighboring villages, and took the opportunity to scout out the location for our evening's repast.  Good thing!  This place was seriously in the middle of no where.  Driving there was an adventure as the round had a couple of switchbacks which required three-point turns to maneuver - fun! 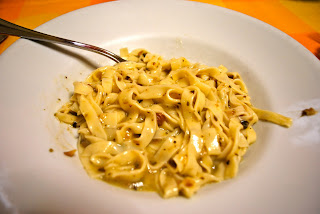 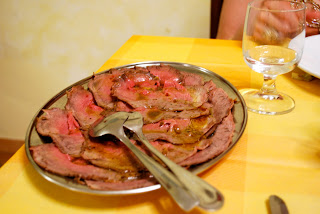 Our reservation was for 8 p.m. and we arrived hungry.  The meal began with both vino bianco and vino rosso, and antipasti, which consisted of pickled vegetables and beautiful prosciutto and hard salami.  A pasta course of both tagliatelle with wild mushroom sauce and ravioli filled with ricotta and basil served with a rich meat sauce, followed the antipasti.  Our middle child, who "doesn't like mushrooms" (as if one had ever crossed his lips before!) went crazy for the tagliatelle and had 2 servings.  Good thing we cut him off at that point because the meat course(s) which came next were outstanding - to begin: beef sliced super thin and served rare au jus.  Ahhh - delissimo!  At this point, both of the older boys were in heaven after many pizza filled days, and their lips were shiny with grease.  They were definitely major participants in the decimation of two platters of that beef.  The beef was followed by a platter laden with roasted chicken, pork ribs and fantastic fried potatoes.  This was the point in the meal when everyone loosened their belts to better enjoy the abundant feast which had been placed in front of us.  Thinking this was the end of a phenomenal meal, we ate with abandon only to be surprised by yet another meat course - an incredible chinghiale (wild boar) stewed to tenderness.  Wow! 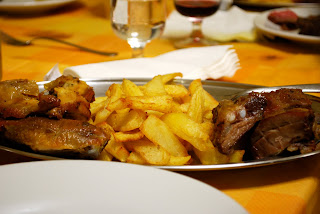 Accompanying all this meat were bowls of white beans cooked al dente and flavored with olive oil and salt - simple and delicious.  We threw  in the napkin at that point unable to consume another bite but somehow managed to indulge in some light yellow cake, biscotti. and a slice of mild goat's milk cheese cut from a 10" wheel.  I expected the cheese would have a funk to it, but it was absolutely delicious.  We followed local custom and dipped the biscotti cookies in vin santo to soften them and thus, we concluded an incredibly memorable meal.  Our drive home through the woods and valleys gave us time to digest and make some room for that bottle of chilled limoncello that waited for us at the villa.  I don't think any of us wanted to leave Italy, but meals like these will stay with each of us for a long time to come.  Probably on our waists.
Posted by DelSo at 11:51 AM