We are finally wrapping up Tom's 50th birthday extravaganza with a family & friends gathering in Massachusetts at my brother-in-law's place.  After a hot and humid welcome back this week, yesterday was the first day I cooked anything more involved than grilled cheese or turkey dogs and, I must admit, it felt pretty good to get back in there. 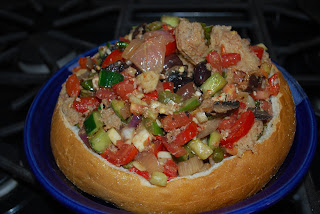 We wanted to keep things pretty simple and not have to fuss when we could be swimming or lazing around, so I tried to make items that would be prepped in advance.  Continuing to riff on the Tuscany theme seemed to make sense so I decided on a panzanella salad and tiramisu to start and end the meal.  I've made panzanella before - it is truly the perfect way to throw together summer's bounty in one bowl, but I really played with it this time around.  Operating on the premise that most anything tastes better when grilled, I grilled all the veggies for the salad - other than the tomatoes, cuke and the fennel.  It's nice to have a bit of crunch, too.  For vegetables I chose red peppers, zucchini, portobella mushrooms and red onion.  The zucchini were cut into thick discs which I brushed with olive oil.  I left the mushrooms whole during grilling and gave them a little brush of olive oil as well.  After the veggies were all cooled, everything got a coarse chop, a dash of sea salt and a toss to mix in a large bowl.  I julienned the fennel and chopped the cucumber and added them to the mix along with a drained jar of capers, a big handful of chopped basil, some cubes of fresh mozzarella and about 3/4 cup of nicoise olives.  This morning I finished things up by adding 3 chopped tomatoes and a drizzle of olive oil and balsamic to the bowl of veggies.  I hollowed out a round loaf of sourdough and then tore the insides of the loaf into chinks which I places on a baking sheet.  A 1/3 of a cup of olive oil was warmed with 3 minced cloves of  garlic which I then tossed with the bread chinks and warmed in the oven until crunchy.  The bread was introduced to the vegetables and the combined ingredients were then spooned into the bread bowl.  Done. 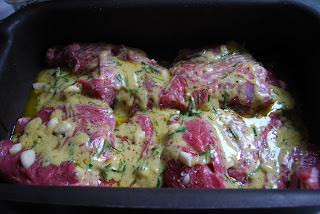 We originally planned to grill steaks, burgers and hot dogs but I got a hankering for something a bit more interesting.  Leg of lamb was the answer!  We called Falvo's and asked them to prepare a butterflied piece for 12 adults.  $47 later (which really seems like a fair price for the beautiful, hand cut piece of lamb) we were in business.  Fairly recently I was at some appointment (nails, dentist) and the television was tuned to Rachael Ray as she prepared a leg of lamb and I let that be my inspiration.  Now, you Racheal Ray haters, she never claimed to be a chef, nor do I, and I do appreciate the simplicity that she brings to the table.  I poked some slits into the lamb and inserted slices of fresh garlic into them.  Next came a generous sprinkling of coarse salt and ground pepper.  And to finish - a bath of olive oil, mustard, lemon juice and chopped rosemary.  We'll grill that bad boy up later. 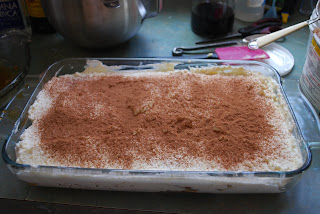 We're wrapping things up tonight with tiramisu and limoncello.  My tiramisu isn't traditional - I don't add eggs for starters, but everyone who has sampled it seems to enjoy it.  I soften marscapone and then beat it until smooth.  Next heavy cream, vanilla and sugar get combined to make a whipped cream which I fold together with the marscapone.  I add a generous amount of kahlua and a splash (or two) of sambuca to strong (cooled) brewed coffee in a flat bottomed pie pan.  And then the assembly process begins.  You've got to move fast at this point because the lady's fingers disintegrate in no time flat after they've been dunked in the coffee.  I used a large, glass pan this time around because I'm making enough to serve a gang of 12 or 15.  Place the pan of coffee right next to the dish you're assembling the tiramsu in.  You'll immediately understand why when you dunk your first row of lady's fingers.  It's a pretty simple process of dunk, place and top with a generous layer of the whipped marscapone cream.  Repeat.  I usually do two layers and finish by dusting the top with cocoa powder.  Refrigerate.
So - that's our plan for the afternoon.  What do you have going on?
Posted by DelSo at 10:22 AM