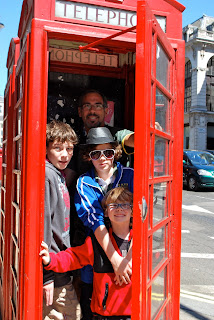 Prior to our visit earlier this month, I hadn't been to London in a long time - almost 20 years.   In the past I've always considered London to be huge, sprawling in every direction with too many neighborhoods to ever fully explore.  This sensibility of mine made planning a mere two days there a bit of a challenge - where to stay?  What to see?
I began by booking a flat rather than hotel rooms and I selected an area of the city that was just being developed during my last visit - the Docklands.  This area southeast of central London is very reminiscent, to me, of Battery Park in NYC.  I received some criticism for staying "so far" away from the tourist areas, but, this place was just about ideal for us.  The flat itself was modern, but a bit dingy in the carpets and bathrooms, with a grocery market and transportation (Docklands Light Rail) nearby.  We arrived late on Saturday night, leaving 2 full days for hitting the sights. 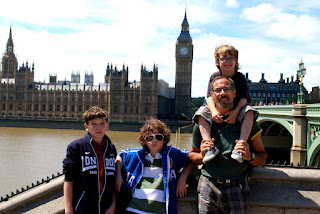 We began by figuring out the transportation system, which is both fairly priced (about $25 total for our family's one day travel cards) and convenient.  Using a combination of the DLR and the Tube, we were on Regent Street in 20 minutes - perfect.  Our meandering path took us to Piccadilly Circus, The National Gallery, Trafalgar Square, past 10 Downing Street and to Westminster Abbey and the Houses of Parliament.  We bought tickets for the double decker bus tour in the afternoon and spent the latter part of Sunday, as well as Monday morning, riding the bus (and a boat on the Thames) around London.  This was the third hop on/hop off bus tour (the others being in Dublin and Belfast) we've done and they are a really easy way to hit the major sights.  I don't know why these tours are so expensive at home (NYC for a family of 5 = $220+) but in London the price at less than $100 was a great value.  Actually, we found most things, including the London Eye and the Tower of London, to be about $100, not quite the hemorrhaging of money I had imagined, but certainly capable of putting a dent in your wallet without consideration. We had hoped to ride the London Eye at sunset, but the evenings are so long in Europe in the summer that we didn't have the fortitude to occupy ourselves until 9 pm, particularly since we were still on Italian time.  The views were outstanding, but, honestly, I could have done with a 15 minute ride rather than the 30 minutes required for a single rotation.  I definitely get a little irrational about heights and was convinced that at least one of the Lilly boys was going to push against the door that quite clearly said "Do Not Lean on Doors" and plummet to his death... 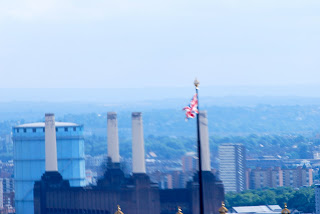 I did take a moment, however to catch a photo of this factory (minus the floating pig)  which gained fame as the cover of Pink Floyd's Animals album.  We finished the evening with a great dinner, including Peking duck, in Chinatown.  Should we have had pork, do you think?
Monday we hit up the Tower of London, which is only cooler after watching a couple of seasons of The Tudors.  We didn't see the crown jewels (insert Royal family joke here) this time around because the queue was way too long, but the boys definitely got something out of visiting this amazing place.  The family split, as Tom and the two younger guys went the Ripley's Believe It or Not museum while Liam & I shopped, and then bounced to Covent Garden, where Griffin and I took in some street performances while Tom, Liam & Quinn visited the London Transport Museum.
While we certainly didn't see close to everything that London has to offer, the guys definitely got a flavor for the city, the culture and the history.  The weather was spectacular, the boys were generally cooperative and the beer was tasty, all good reasons to go back before too much time passes.
Posted by DelSo at 7:24 AM