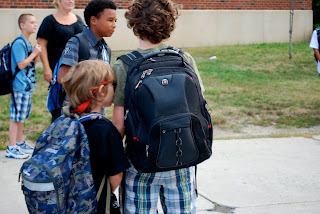 Last night I attended Open House at the school where my 2 younger sons recently began the academic year.  The evening's event was specifically designed for 5th and 6th grade parents and the experience prompted a flood of thoughts from me.  Although Griffin is in 6th grade, he is new to this school at the end of our block.  Last year, I became less satisfied with his elementary school and decided I would prefer that he attend the magnet school in our neighborhood, rather than truck it by bus to the smaller school he had attended since kindergarten.  Admittedly, the recent change in how Albany's middle schools were populated was also a factor in my decision; the policy had shifted to "feeder" schools instead of one of lottery/neighborhood preference.  I wanted Griffin to have the opportunity to attend a school within walking distance,  not just this year, but for the next three years. So, we applied for the lottery in the spring and now have 3 children who walk to school, two of whom attend the same building.
When I was an elementary school student we moved a lot, and, by the time I was in sixth grade, I had attended 5 different schools in 3 different districts.  I am very sympathetic to Griffin's being the "new kid," however, I also know that he will ultimately develop more confidence as he learns to negotiate his way through a new academic setting.  He will have the benefit of experiencing two different schools and learning that educational settings have both similarities and differences, a fact which remains constant despite education's steady march towards standardization and homogenization.  I was really impressed with the teachers I met last night and their devotion and enthusiasm for their craft was obvious.  I am incredibly optimistic that Griffin will have a great year, but I witnessed something last night that has left me sobered with sadness.  During a presentation by one of the academic teachers, a sign-up sheet was passed around the room inviting parents to participate in the planning and execution of 6th grade graduation in June 2011.  After I added my name and contact information to the list, I handed the sheet to the woman sitting nearest to me.  A few minutes passed and I realized she was still looking at it.  I assumed she was trying to project into the future about her availability, perhaps mentally considering her calendar of commitments.  Until she got my attention to ask, "Is this where we put our names to show that we were here?"  I was stunned.  I don't think she was able to read.
As I struggle with the daily decisions and stresses and challenges involved with parenting, I will do my best to remind myself of the positive ratio of advantage to challenge which we, as a family, possess.  And to remain cognizant that a fundamental purpose of education should be to open everyone's eyes.
Posted by DelSo at 8:32 PM