When faced with a freakishly large head of broccoli rabe, and the desire to limit carbohydrate consumption, what would you do?  If carbs were not an issue, I'd be all about making a pot of polenta, Union Square Cafe-style with milk, Gorgonzola and toasted walnuts.  I've been trying to wean my body off carbohydrate satisfaction, though, so this was not an option.  What I did have available, however, was about a third of a pint of fantastic mixed olives that I had picked up last month at Eataly.  Speaking of which, have you been there yet?  Let me tell you, it is off the hook crazy, fantastic.  When you go have lots of time and lots of money - but don't go hungry.  I personally found it a bit overwhelming because there were so many options - options for dining (eat in/take out/full service) options for products (olive oils, cheeses, meats, baked goods, pastas, wines, chocolates, etc) and beverage (vino, vino, vino).  And, my issues with making choices have been repeatedly documented of late.  I walked out with a large bottle of Ligurian olive oil and a pint of olives and made my way down Fifth Avenue to Otto where their comprehensive menu seemed inherently more manageable to me. 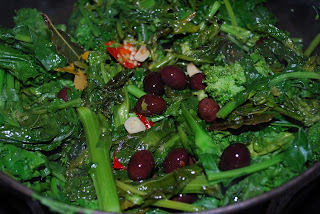 But, to return to the simple task at hand - greens and olives.  I heated up some olive oil (not the Ligurian which unfortunately met an untimely demise when it landed on the ceramic tile in our hotel lobby.  A sad story, but easily enough replaceable.) and made a few cloves of minced garlic golden brown.  I then unceremoniously dumped in my olives, along with the orange peel, slivered hot red peppers and unidentifiable (to me) leafy green herb which accompanied them.  Next up was the freshly washed (purposely not spun dry to add a little liquid to steam), coarsely chopped rabe.  The broccoli rabe needed to be added in batches because the head was so humongous that I couldn't have fit it all in the fairly large saute pan at once.  My "technique" was to fill the pan up, put a lid on it and walk away for a couple of minutes - at this point the heat was somewhere between low and medium, perhaps a 3.5 on a scale of 1-10.  As the rabe wilted, I tossed it around a bit and added more, trying to keep the cooked greens on top of the raw.  I repeated this until the greens were cooked al dente.  To finish, I seasoned with salt and crushed red pepper flakes.  Admittedly, these would have been divine served in a bowl crowning a mound of creamy polenta, but, I thoroughly enjoyed them nonetheless.
Posted by DelSo at 7:48 PM