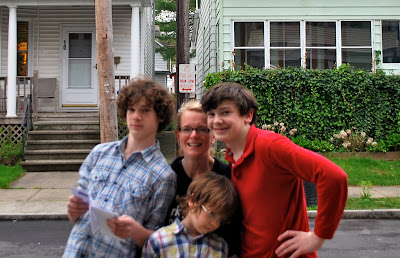 When my oldest son was born via an unanticipated c-section, I felt incredibly removed from the process.  I suspect it was more because of the drugs I was given than his method of arrival.  I believe I've mentioned I don't really care for pharmaceuticals before. Afterwards, I remember confessing to a friend that I could have been given any baby and would have loved it equally as much as I did that less-than-6-pounds-wonder that was handed to me by the trusting nurse in the operating room.  The process was completely unexpected but I adapted to the circumstances.  I became a mom.


By the time I was expecting my second child, the friend I had confided in was anticipating the arrival of her daughter, via adoption.  After years of interventions and attempts at conceiving a biological child, my friend and her husband had navigated the foreign adoption process.  They brought their infant home a couple of months before I delivered, naturally, my full term, full sized baby boy number two.  Our babies were introduced in my newborn's first week of life on the outside.  My friend told me she had been comforted by my admission years earlier, that those words had helped convince her that having the capacity to love a child had very little to do with having the ability to birth one.  She became a mom.

Adapting to becoming a mom or adopting to become a mom, are equally enormous leaps in a woman's life, certainly too huge to be honored in a single day. To all you women out there who have ever made the decision to love a child - I wish you a Happy Mother's Day.
Posted by DelSo at 6:14 PM