At least that's how my youngest described me in this year's utterly precious Mother's Day card.  Yep, it's a keeper.  This was my 16th Mother's Day and it contained both poignant and annoying moments. Kind of like motherhood,  in general,  I guess.

Quinn gave me a marigold, Griffin gave me a song and dance about the present I was going to receive at some undetermined point in the future, Liam gave me hope that he will one day shave that caterpillar of fuzz from above his top lip and they all gave me a hard time about walking the slightly over a mile distance to the Capital City Gastropub, our chosen brunch spot.  Just another day in paradise, right?

The death march walk on a beautiful late spring day was filled with conversations and complaints, probably in nearly equal measure.  I don't really remember Mother's Day 2011, my first as a separated parent, but I believe that this year was my first public Mother's Day as an unattached mom.  And it was a little weird.

The boys and I sat on the Gastropub's sunny front patio seated next to another unaccompanied by a partner Mom and thoroughly enjoyed our bountiful brunch.  I felt proud of my children for their appetites and their manners, Quinn's requests for a beer, aside.   When it was time to walk home, the older boys went ahead of Quinn and me, moving at a different pace than a 7 year-old with comparatively short legs and a 45 year-old with a belly full of smoked salmon and eggs.  As we approached Albany Academy, I suggested that Quinn hand his glasses over to me and take a tumble down the grassy hill, an idea that he enthusiastically embraced.  After his third spin, he staggered to his feet and remarked that he would have missed the opportunity to have that fun experience had we driven rather than walked. 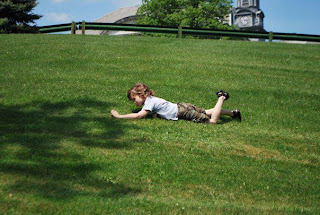 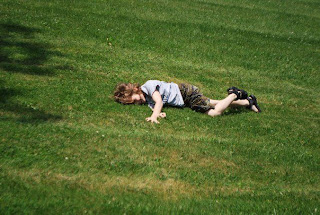 Very nice, funny, huggable and, dare I say, sometimes able to teach my boys that taking a walk and roll or two down a hill is a much more enjoyable way to travel through life than merely being a passenger. Hugs for everyone.
Posted by DelSo at 3:00 PM