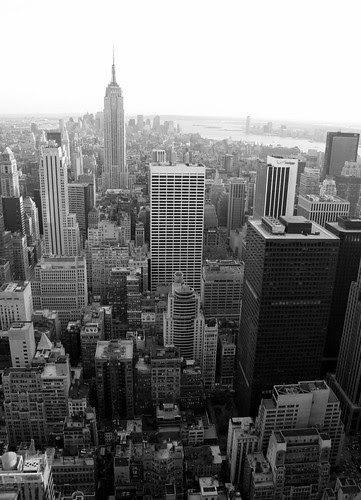 Where to begin? The train ride down was terrific despite the fact that Tom & I did not consume a bottle of champagne on the way south, as is our decadent tradition. Quinn actually took a little nap and woke up not-too-crabby and the apartment rental thing went fine even though collecting the keys was a bit sketchy. The 2 bedroom place we rented for 3 nights was reasonably priced ($150 a night) and nicely located on W 58th between 9th & 10th - in Brian & Lisa's old neighborhood. The layout was a bit weird, picture a long hallway with a bedroom, bathroom and kitchen off the right side, finishing with a sitting area and a 2nd bedroom. Over-heated, of course. Perfectly acceptable for us and very convenient for our activities. Day 1 we had a nice pizza lunch - very thin crust, and got busy by visiting the Titanic exhibit at the Discovery Center. It was particularly cool to see the artifacts that had been recovered from the ocean floor, especially since Liam & I had visited the shipyard where the Titanic had been built in Belfast, last year. Tom took the other two boys to Toys r Us in Times Square while Liam & I did our thing. We rendezvoused midtown and wrapped up the evening with a viewing of Percy Jones (Johnson?? Jackson) and the Lightening Thief. The movie was predicatable, but it did afford me a 10 minute nap, which I sorely needed. And that was Day 1.
Posted by DelSo at 12:12 PM