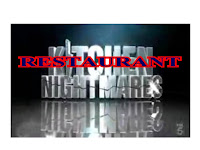 No, really, literal restaurant nightmares filled the hour this morning between 4 and 5 a.m. If you've worked in a restaurant perhaps you've had your own version. For me, they usually involve unexpected diners and a lack of necessary items such as menus, silverware, glasses, etc. The version that I experienced this morning was particularly vivid. I was at McGuire's and expecting a party of 6, which became instead a party of 9. I went in the kitchen to gather additional silverware, glasses and napkins. When I returned to the dining room there was an unexpected party of 6 sitting at a table which had been rather haphazardly put together. I addressed the party of 9 and got them situated only to see that the surprise party of 6 was now 10. I returned to the kitchen for place setting items and, of course, the party of 10 had morphed into a total of 40 people scattered throughout the restaurant. Now, if you've been fortunate enough to have been to McGuire's, you know it is a lovely, small restaurant. In my nightmare, there were all kinds of additional rooms where people were impatiently waiting to be served. I was running around like a crazy woman trying to gather sufficient silverware, which, of course, we did not have enough of. I was unwrapping forks and knives and spoons from their annoying little plastic bags and basically losing my mind. When I finally got the last place settings in front of the guests who were waiting none-too-patiently, a woman sniped at me that "most restaurants set their tables prior to their guests being served their meal." I looked her dead in the eye and said "Most people, particularly when they are traveling in a pack of 40, call a restaurant prior to arrival," which, honestly, is something I would really say. She tried to provide an excuse about how they were celebrating some unexpected political victory and I discerned that they were all Republicans. What can I say? Even in my nightmares the Republicans are the bad guys.
Posted by DelSo at 8:07 AM