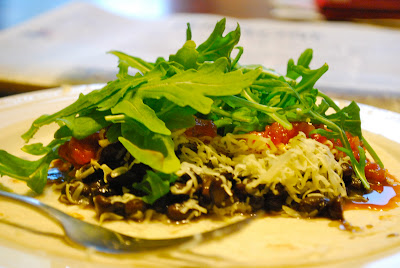 Seems like a long time since I've done a Sunday dinner post.  Last week's dilemma was my indecision about whether I should run or eat.  Because I sometimes have an issue with making choices, I went with all three.  "Three?" you say,  "Weren't there only 2 options?"  Perhaps to those who think in a much more linear fashion than I do. there were only 2 choices.  I went with a light pre-run snack of a fantastically delicious peach and then ran. I followed my run with 2 black bean burritos with cheddar, salsa and Arugula.  Perfect.  The beans are kind of a joke (at the least my former roommate, Rachel would laugh) because they came from a can and I didn't let them cook for days and days until they were so incredibly flavorful one could enjoy them at any and every meal of the day.  Nope, not like Rachel's beans, but these were ok after I doctored them up with cumin, red pepper flakes, a touch of cinnamon and salt. And, following my four mile run they were damned tasty on a warm flour tortilla.  Sunday dinners may not be what they once were, but they still are a great way to wrap up a weekend. 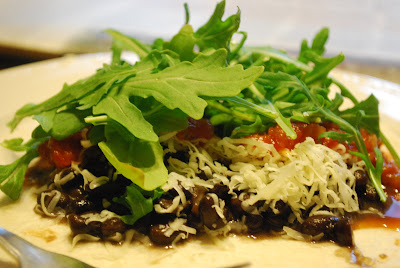