Last night, I met a couple of friends in Schenectady at The Van Dyck for beers and a bite to eat.  I've been to the Van Dyck, in its various incarnations, a couple of times over the years and have always thought of it as a cool space not living up to its potential.  After last evening's meal, I'd have to say I still feel the same way.
A couple of positive things should be noted.  The place was busy which is really nice to see.  There is a lovely looking patio in the back which had a significant wait for a table - good for them.  The service was very pleasant and the beer was damn good.  I completely enjoyed the two hefeweizens I ordered, although oddly enough the first was garnished with lemon, the 2nd was not.  There was the distinctive clove-y taste present that I will always associate with spending time in Munich with my brother in the summer of '92, a very good memory.  I didn't see the check last night so I can't tell you how much the beers cost or how large they were other than "tall."   And, unfortunately for a place trying to build a name as a brew pub, there is no information on their website about the beers - at all. After a little more digging around (or research as we librarians call it), I did come up with this webpage describing their beer selections.  The brewery is new so I guess I can cut them some slack, but don't you think the Van Dyck homepage should have some mention of the brewery's activities and offerings? 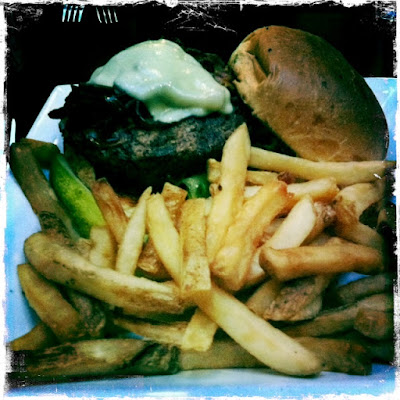 I ordered the Van Dyck signature burger asking for it to be cooked no more than medium rare.  As you can see, the plate was prettily presented with fries and a pickle and big burger.  I immediately went for the fries which were...not hot.  I'm sorry, but I don't eat fries all that often and when I have potatoes which have been completely submerged in nearly boiling oil on my plate, I want them HOT.  So, I flagged over the server and asked for some hot fries, a request which seemed to puzzle her a little, but one which she was more than willing to accommodate.  It was only after she left the table that I cut into my too-big-to-manage-without-cutting-in-half burger and realized that it was cooked way more than medium rare.  In fact, it was well done.  I just didn't have the heart to send it back and since it did still manage to be flavorful, I ate it. The balsamic onions added some moistness to the meat and it was a pretty good burger - actually it was as good as a well done burger could be, I bet. The pancetta was a nice salty addition and went well with the char on the burger.  I couldn't eat the entire burger/roll, so I did my best with the beef and sadly left most of the lightly toasted roll on the plate, opting instead to indulge in the hot fries.
So - would I go back?  Sure.  I realized, as I was racing to meet my friends after a delightful Friday afternoon spent at home, that Schenectady really isn't that far and I should make more of an effort to explore the scene there.  The beer was really good, the space was comfortable and I think I could probably get my burger and fries cooked to my liking with really explicit directions, an effort I don't mind making.  I'd definitely be happy to give The Van Dyck another opportunity to achieve their potential - and give myself a chance to try more of the beer offerings.
Posted by DelSo at 10:35 AM