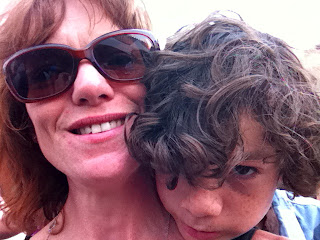 A mere 18 months after purchasing our tickets, Griffin and I, at long last, drove north to catch Bono and the boys live at the Hippodrome.  As I explained to G, leaving the country to see a U2 show at the ripe old age of 12, is an experience not to be belittled - nor will he be doing anything like this sans parent for many years to come.  Which, I suppose means he won't be repeating this episode period, since apparently my dancing, screaming and general jumping up and down, embarrassed him beyond belief.  Oh, well.  I've got someone else in mind for my next trip out of the country anyway. 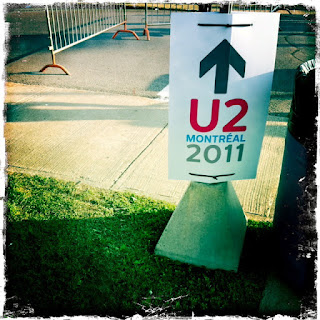 But, back to this trip...the drive was uneventful and we skirted around the main border crossing thanks to a tip from my friend, Kevin.  After checking in to our hotel, we grabbed a quick bite to eat and then headed for the show convinced that getting there was going to require patient efforts.  And, we were right.  Seriously, Montreal Metro folks, how about opening up more than a single window for ticket sales?  I mean, oui, I understand there is that single automated ticket machine, but when you're expecting 80,000 to travel to a venue where there is no parking, what were you thinking?  Eventually, we got there, happy to be freed from the packed to the gills train on a very hot evening.  There was a short walk to the actual venue and we settled into a comfortable spot on the "floor" of the arena. prepared for our universe to be rocked.  Things here were fairly well organized - lots of porta potties, vending and plenty of concession people circulating with cold, expensive beverages.  But, who cares about any of that?  It was about the show dammit!
I was fortunate enough to have seen this show in '09 at Gilette Stadium, and I've got to tell you, it is, as always, the best show I've ever seen.  The set, the sound, the effects, the MUSIC, the BAND...incredible.  Always.  I can't describe it any better than, for me,  seeing U2 is like being served Mass at the Vatican.  By the pope.  Amazing.  The set list is here and there are a couple more pictures below.  The band will be at Giants' Stadium next week - anyone have an extra ticket?  I'll drive. 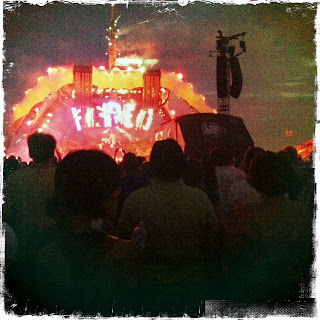 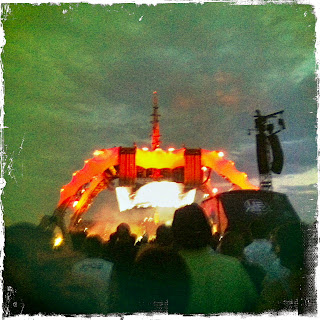