Occupying a place in my heart 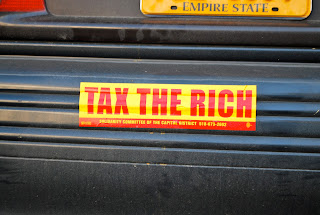 I'm a bad Capitalist. I have no urge to accumulate possessions or wealth, I only aspire to pay my way fairly through life. I am always able to see that someone needs something more than I do - that $3 that rounds the tip up to a nice even number which doesn't require change, those extra few bucks in my checking account that the Regional Food Bank could use since my pantry is more than sufficiently stocked. It isn't as if I believe people shouldn't have to work or that it is unreasonable to expect adults to make a contribution to society, particularly when they are able-bodied and healthy, it's just that I can see that I have more (fortune, opportunity, smarts, survival skills - you pick) than many others and I'm good with sharing. And I will never understand why anyone feels the need to have a net worth of X billions of dollars. 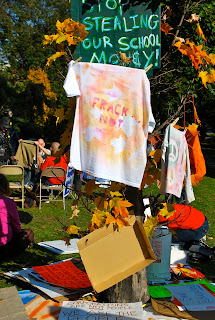 Do you think that being a multimillionaire somehow provides a person with a more meaningful existence? Are their thoughts really worth more than mine (Warren Buffet aside)? Are they happier and more fulfilled? I don't think so.
Should the president of my union being making $345,987?? I don't think so. Does the fact that he is, make me sick to my stomach? Absolutely. Is his position comparable to that of President of the United States, who receives a salary of $400,000.  Yes, yes, I know there are numerous factors beyond mere salary when it comes to compensation, but, really?  I don't think the job descriptions or responsibilities are all that similar between those two positions. 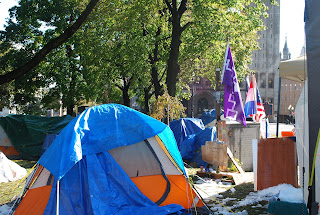 This morning I made my second visit down to the tent city known as Occupy Albany.  I arrived with 2 loaves of freshly baked bread and a sense of guilt that I was not doing more to support a movement that proves that residents of my country are not afraid of making people, including themselves, uncomfortable when it comes to examining the deterioration of our country's values and sense of priorities.  I left with regret that I can't do more to support their activities other than bake bread, take some photos and publicly acknowledge their efforts.  What can you do?  And - what should we all do? 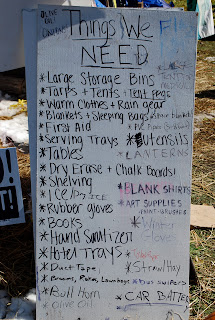