Sunday - supper included, was all about Father's Day.  From the indulgent sleep-in, followed by gently scrambled eggs with cherry tomatoes and a (non)healthy dollop of Rondele' cheese, to the solo 2+ hour bike ride, the day was all about Tom.  We had a number of offers and options for the day, but ultimately elected to remain at home since this was our last day off at home for a couple of weeks.  It was a gorgeous day and naturally, the grill was the way to go for dinner. 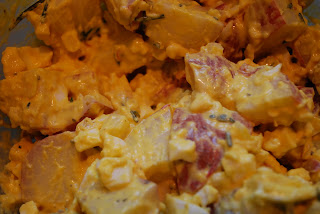 Now, you all have seen what I like to do with a London Broil, so I didn't bother to take a snap of that.  Instead, I've got a couple of side dishes to share.  We had some lovely small redskin potatoes screaming to be made into potato salad.  While the hubs was still getting his beauty rest, I scrubbed them and cut them up a bit and cooked them until they had slightly softened.  I wanted them to be a bit firm, so after I determined they were almost where I wanted them to be in terms of softness, I gave them a cold water rinse to stop their cooking, and left them alone while I attended to other things.  When they were cold, I tossed them with 4 chopped hard-boiled eggs, a minced Vidalia onion, mayo, fresh rosemary from the deck and salt & pepper.  Pretty basic, but pretty damn delicious.  I'm glad I got this done early in the morning because I think the flavors really need some time to meld - plus, who really wants to be boiling things like potatoes and eggs when it's 90?  The extreme yellow yolks of the organic eggs we use gives the salad a richness that is unrelated to the amount of mayo used - for 6 potatoes, I used 3 or 4 T of mayo, the new Hellman's brand with olive oil, incidentally. 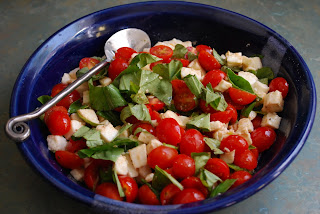 I truly believe that colorful food is generally the most healthy,  with Fruity Pebbles being the obvious exception to this rule.  I made a simple cherry tomato, fresh basil and mozzarella salad which I lightly dressed with olive oil and balsamic.  After I took this picture I remembered that I had roasted some orange, yellow and red peppers earlier in the week, so I chopped a bit of those up into a pretty confetti of flavor and vitamins and added them post-photo-op.  We also had some corn on the cob, which, quite frankly wasn't worth photographing.  Actually, it was barely worth eating - tough and lacking in flavor in a big way.  I know, it is wicked early in the season to be eating c on the c, but we had some 2 weeks ago which was dynamite!  Oh, well, can't win 'em all.  We finished up with some brownies (from a box, but with added chocolate chips),  and an episode of The Next Food Network Star which only added to the evening's sweetness by eliminating the annoying and incredibly awkward Dzintra.
Remember - this will be my last Sunday Supper for a couple of weeks.  Our next Sunday Supper will take place in a villa in Italy where we've arranged to enjoy a traditional Tuscan dinner.  Details to follow...
Posted by DelSo at 5:22 PM