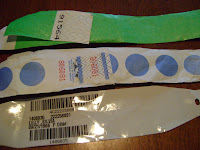 So...guess which of these wristbands was the most fun to wear? I'll give you a clue - it wasn't the one on the bottom nor was it the one on the top, which obviously leaves the one in the middle. 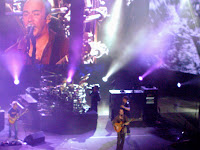 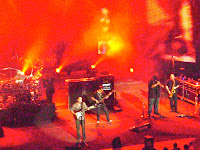 I had my surgery Thursday afternoon and everything went well. The surgeon was very pleased and feels reasonably confident that the tumor will turn out to be a benign mass which makes me 0 for 2 in terms of predicting cancer, a statistic with which I am quite comfortable. The AMC experience was really quite good and I felt well taken care of, although I continue to be, quoting my doctor, "an anesthesia lightweight." So be it.
The green wristband is from the "Biergarten" at SPAC and, ironically, it is guaranteed to be the only speck of green within the fenced-in area where adults may purchase incredibly overpriced beer and wine. Calling it a "Biergarten" is such a misnomer - hello, it is quite clearly a "Beer Cage." I was still feeling the effects of the wretched hospital pharmaceuticals and did not indulge in overpriced alcohol, however, with all the crackdowns in place, this was basically the only legal place to enjoy (?) a beer.

Now, that polka dotted wristband was my ticket to fun! Despite being released from the hospital a mere 6 hours earlier, I was committed to making the Dave Matthews Band show at SPAC, particularly since Dave is taking next summer off. I've lost count of how many DMB shows I've seen over the years, but they're always a good time, unless, of course, you're a puking or passed out dumb ass kid. Speaking of which, I really wish folks would embrace the concept of moderation, believe me, we would all have a better time. We had awesome balcony seats (my preference after the year when the frat boys rushed from the lawn into the amphitheater like a bunch of snot nosed, entitled brats), and I genuinely enjoyed the show until I hit the proverbial wall. Not staying for the entire show was beat, but I consoled myself with the fact that I would be chaperoning the senior ball the very next evening at the Hall of Springs, and the knowledge that I would be in better form for the Bethel Woods show in July. Overall, it wasn't the best DMB show I've ever seen, but it sounds like the last 45 minutes were smoking. If anyone has an extra recording, please pass it my way...

Thank you for all the positive thoughts and well wishes which came my way. I truly appreciate it. Summer 2010 is beginning to look better and better. :)
Posted by DelSo at 12:37 PM