So we went to the Great Escape yesterday for family day.  The weather was perfect and the boys are the ideal age for many of the attractions and the water park activities.  I think we were last there 2 years ago and there were a couple of new things my husband wanted to try - some water ride that looks like a huge striped toilet and a knock-off of Universal's Tower of Terror
elevator ride called the Sasquatch.

We arrived at 11 a.m., paid our $10 to park and then bought our way in to the tune of $137.  That was the price for three of us,  we had free admission tickets, carefully cut from cereal boxes, for our two younger boys.  Okay - let's have some fun!  First up was the antique car ride thing.  Insider tip:  If you're looking for this ride it is really close to the smoking section that was so thoughtfully placed in close proximity to the children's rides.  The line was about 30 minutes long and would certainly have been shortened had the Great Escape folks repaired the 3 or 4 cars which were parked to the side seemingly out of commission.  No worries, the wait gave our middle son the opportunity to attempt climbing the rope ladder at an additional cost of $5.
During all of this activity, the husband did laps between our location and the nearby Boomerang roller coaster, trying to get information about when that attraction would be running since it was not currently open.  The estimate was an hour, meaning 2+ hours after the park opened.  We moved on and headed over to the Ghost Town to give the log flume thing a whirl.
On our walk we couldn't help but notice how many of the park's visitors were overweight. I'm not talking about an extra 5 or 10 lbs, I'm talking about grossly, morbidly, tremendously obese - children as well as adults.  Unfortunately this condition only became more noticeable (unavoidable?) when we arrived at the Splashwater Kingdom area of the park.  I'm sorry.  I try to not be overly critical (although it is a part of my astrological make-up as a Virgo) but these people were hugely overweight and seeing children with stretchmarks just freaks me out.  Keep in mind that it was a hot day and it seemed as if the larger people were suffering in the heat even more than the folks of more moderate size. And, in all honesty, I was feeling a little angry at the clothing manufacturers who produce clothing items that reveal more than I want to see in a stranger.  I decided to relax and take a float in the Lazy River, however, there weren't nearly enough tubes for the number of people present, which annoyed me all over again.  If I were an emotional eater, I might have indulged myself in ice cream at this point, but I honestly don't know if I will ever be able to drop $4.99 for a small Ben & Jerry's.  Ever. 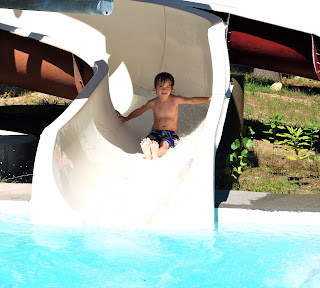 It was really nice to cool off in the Lumberjack water area.  Too bad 2 of the 4 slides were unavailable.  I understand that staffing becomes an issue in late summer when many of the college student employees depart for campus, but, if you're giving me reduced attractions how about giving me a comparable reduction somewhere else?  We could start with the $36 for three orders of chicken tenders with (half-cooked) fries. We never made it into the Tidal Wave pool because each time we walked past it, they life guards didn't appear to be allowing anyone in.  It must have just been poor timing on our part, huh? 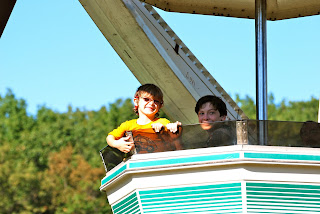 As the day wore on, we hit a couple of more rides before heading back to Albany for our date night at Cafe Capriccio, including the River Rapids, which was the perfect ride for our entire family, and the Ferris wheel.  It seemed like there were more rides that we didn't try than those we did manage to attempt and I completely lay the blame on the people who "run" this theme park.  The lines were ridiculous and I left with the pervasive feeling that there were not enough employees to supervise and maintain the attractions.  Period.  The next time Tom suggests we take the longer drive to Six Flags New England, I may actually acquiesce. 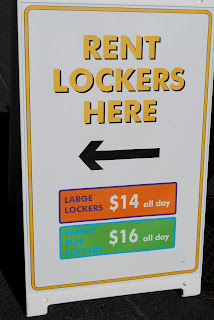 I wished that I had thought to bring our trusty red wagon because I got tired of carrying all of our crap and lockers were not an option at these incredibly ridiculous prices.  Really? $16 to use a locker for the day?  Is that $480 a month?
You folks know that I will happily drop $300 on dinner for two, but paying $3.50 for a small water is offensive, in my opinion.  I also don't appreciate being solicited for vacation giveaways when I am arguably already "enjoying" leisure time.  That sense of being offended, unfortunately,  is what remains a day later.  That, and a deep regret that I agreed to return to the Great Escape in October for their Halloween Fright Fest.  Hopefully, the attractions and entertainment will manage to be more frightening than the park guests and prices.
Posted by DelSo at 10:32 AM