My oldest son watches way too much television.  The only redemption from all this television viewing, in my opinion, is that he has learned some useful and cool  information.  From watching crime shows like CSI and NCIS, he learned the fact that there are bomb smelling dogs and drug smelling dogs and that the Labradors that were pacing up and down the aisle on yesterday's train to NYC posed no threat - just kidding!  Watching NYC's NY1 channel obsessively, exposes him to cool events and activities in the city, such as the installation currently on display at the Metropolitan Museum of Art.  When he asked me last spring if we could go to check it out, I readily agreed.  Yesterday was the day. 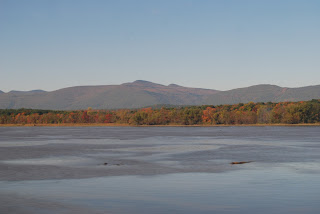 Since it was only Liam and me, we splurged a bit and bought Amtrak tickets.  There was actually some sort of special promotion going on and we were able to travel Albany-Penn for a total of $88 r/t, which was a fair enough price.  We jumped on the 10 a.m. and enjoyed a beautiful and comfortable ride to NYC.  Is there anything more majestic than the Hudson River on a gorgeous October day?  It seems like the foliage is a little late getting started this year, but, the trip was a feast for the eyes nonetheless.
We hoofed it up to the Metropolitan to rendezvous with friends, pausing on the front steps to enjoy NYC style snacks - a knish for me, a pretzel for Liam.  I'm pretty picky about my knishes and the ones sold in front of the Met have never disappointed me - fluffy potatoes, an exterior with a bit of a crunch and always served piping hot.  Delicious!  Our group headed to the rooftop and were thoroughly amazed by the structure, as well as the view.  The installation is only up until the end of October, but, if you can find some time to get to the city, I recommend it.  There were some lights strung around the sculpture so I imagine nighttime viewing would be pretty cool, too.  All the necessary information is here.
We kind of blew through the museum on our mission to see this installation because it was way too nice out to be inside for long.  We'll get back down there as soon "Washington Crossing the Delaware" is viewable again and will be more thorough in our art appreciation.
The next stop on our agenda was Central Park, specifically Strawberry Fields.  I don't know about you, but the shooting of John Lennon was one of those definable moments in my life, right up there with Elvis' death and the Challenger disaster.  In honor of what would have been his 70th birthday, we headed southwest through the park to pay our respects.  We were in absolutely no rush and paused frequently for playgrounds, bird filled trees and people watching.
As you would expect, Strawberry Fields was filled with folks celebrating the life of John Lennon.  There were musicians playing Beatles and Lennon tunes in a seemingly spontaneous jam fest.  Tears were being shed by the emotional, as classic hippies shared their memories and voices.  It was pretty cool.  We stayed for a rendition of Imagine and Sergent Pepper's before continuing our ramble south to the West Village.  After fueling up at Starbucks, we jumped on  a train to Union Square to wander around a bit and take care of an errand or two. 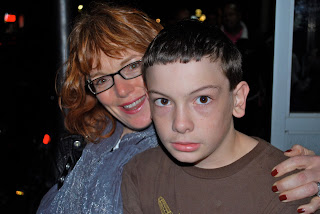 We headed to Bleecker Street via Washington Square Park to grab a few pounds of coffee prior to Porto Rico's big fall sale which starts on October 22nd.   I think 5 lbs will hold us until we stock up later in the month.  You probably noticed we didn't eat very much - nothing other than those snacks hours earlier.  The truth is, I was saving myself for dinner at Lupa.  It seems that whenever I find myself in the city on a Sunday, I am drawn to this spot on Thompson St. for their Piatto del Giorno, Braciole.  This is one of the best $20 meals in town and I always enjoy their version:  Stuffed, rolled, tied, and braised pork shoulder. Here, with garlic, parsley, mint, lemon, cheese.  Seriously - are you kidding me?  It is so damn tasty with this intense tomato sauce clinging to the meat - fantastic.  I started with an order of broccoli rabe with ricotta to get my veggies in and then plowed through half of my entree before declaring defeat.  Liam had the Market Fish (Wild Striped Bass) with cucumber, which he definitely enjoyed.  If you haven't been to Lupa, I strongly suggest you give it a try.  We hadn't called ahead and were told the wait would be 45 minutes - we were seated in less than 10.  Our 3 food items, along with a perfect Bellini and a quarto of red wine my server suggested, came to a reasonable $77.  Following dinner we caught a cab to  meet another friend for a quick drink (and gifted her with my Braciole leftovers!) and rolled into Penn Station with 5 minutes to spare.  God, do I love New York City.  Looking forward to next month's trip with the ladies all ready!
Posted by DelSo at 9:33 AM