You know how people complain about there being nothing to do in the Capital District?  Well, I'm here to tell you that the real problem is not finding enough to do, instead it is finding enough time to blog about what you did do.  Last weekend, I had an intense 36 hour schedule that nearly brought me to my knees.  It went kind of like this: ski - dinner out - Spearhead show - ski - Soup Swap - Sharon Jones @ the Egg.  Crazy, huh? 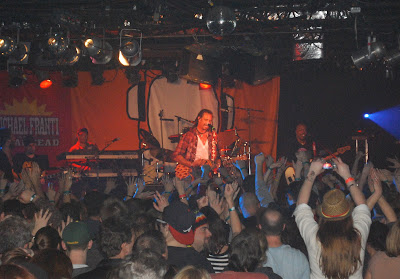 Do you ever feel like it is time to see someone different and new (to you) in concert?  Don't get me wrong, I love going to see Neil Young (x5) and Dave Matthews (x12) but have been feeling the urge to see something fresh - and Michael Franti and Spearhead certainly fit the bill.
My initial exposure to Michael Franti's music came from the Weeds soundtrack and from that first listen to Ganja Baby, I've found his voice and rhythms really appealing. If I were asked to to describe his music, I would probably use words like reggae, hip hop and funk.  Sounds good, right?  Particularly on a cold winter's night in upstate New York.
﻿

﻿Not only was it my first time seeing Franti, but it was also my first visit to Northern Lights. Can we begin with the parking lot circumstances?  Hello, cluster *#&;%!  I realize that there was lots of snow to deal with, but when you're selling 1,000 tickets to a show, maybe someone should think about having some parking direction on hand.  You know, someone with a flashlight directing people in an orderly fashion.  Folks were haphazardly parked all over the place and it was a bit of a nuisance to park the family wagon, to be honest.  Perhaps I should have thought of the parking situation as a preview of the absolutely abysmal design of the interior.  I hope that the person who originally designed this place found a new career because, not for nothing, but the layout of this place is ridiculous.  It has the most bizarre shape of any venue I've ever been to.  There was a moment during the show when I was trying to push my way up front to take some pictures and I realized that I didn't know where the nearest exit was.  And people were holding their lighters up.  Not a comfortable feeling for me which is why the photos are not as good as I would have liked.  Sorry, but I don't dig the combination of a tight crowd, an uncertain exit strategy and fire.
Complaints about parking and venue aside, Michael Franti and Spearhead put on a great show.  It was so hot in this place that the windows were steamy and sleeveless shirts provided the most comfort.  Michael Franti stripped off a layer or two himself, but, never got down to the bare skin (other than on his feet) for which  I was secretly hoping. I had a bit of a permasmile watching the crowd jump up and down in near unison to the beats coming their way and the band played with sincerity and heart.  I was surprised how many songs were familiar to me and have to thank a former student for burning me that copy of Yell Fire a couple of years ago.  Speaking of students, it was totally cool that Franti invited a number of kids to share the stage and I loved seeing one of my students rocking out right next to him.
﻿﻿Seeing this show has made me even more excited to finally get to Mountain Jam this year.  Have you seen the lineup for that weekend?  Anyone else  going to Hunter Mountain in June?  If we're lucky it will be as hot then as it was Friday night in Clifton Park.  Hope to see you there! ﻿﻿
﻿﻿﻿
﻿﻿﻿Setlist:
Ska Intro
Love Don’t Wait
The Thing That Helps Me Get Through
Rude Boys Back In Town
Only Thing Missing Was You
Light Up Ya Lighta
Hello Bonjour
Anytime You Need Me
Shake It
Sweet Little Lies
Gloria
Hey World
The Sound Of Sunshine
Yell Fire!
Say Hey
I’ll Be Waiting I Got Love For You Smells Like Teen Spirit
Say Hey
The Sound Of Sunshine


courtesy of jamsforum.com﻿
Posted by DelSo at 1:28 PM