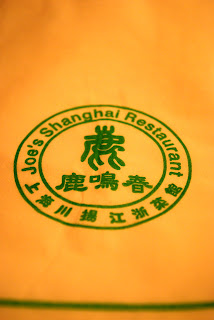 I'm sure you're all aware of Ala Shanghai and their upstate (near) monopoly on the soup dumpling, right?  I know that folks, who know way more about Chinese food than I do, love their soup dumplings, but Joe's Shanghai will eternally hold a special place in my heart when it comes to these luscious pockets of deliciousness, because it was there where I first popped my dumpling, so to speak.
Joe's is in Chinatown on a little side street (Pell) off of Mott.  There seems to be some trickery present on this little block since there are 2 restaurants with somewhat similar names, some other Joe's place and another joint with the  word Shanghai in it.  Don't be fooled - Joe's Shanghai will be the place with line outside on the south side of the street.  Wait for the hostess to acknowledge you and give you a number. Things move along pretty fast and I always find it worth the investment of time.  Once you're seated (perhaps at a communal table with some other lucky diners), you'll be offered an opportunity to order soup dumplings - the appropriate answer is "Yes, please."  I really love the pork and crab combination, and find that one order (6 pieces) makes a great appetizer to start, for a party of 2.  If you're unable to share - get your own damn order. 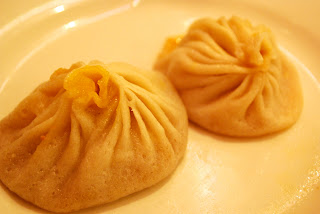 When I mentally compare these with the upstate version, I find the skins on Joe's dumplings to be more delicate and much easier to pierce daintily to release the steam than those at Ala Shanghai.  And, while the dumpling wrapper is thinner, the broth contained by the wrapper has more body and flavor than the local variation.  It just has more taste, in my opinion.  Let's agree to disagree on this point, ok? 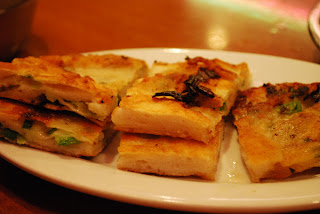 What I will not yield on, however, is the extreme superiority of Joe's scallion pancakes.  Oh my goodness, they're hot and crispy, beautifully browned and loaded with scallions.  The limpness which I've experienced in Latham makes me think that we're not even comparing the same food item.   Get these.

Lisa ordered the pork and scallions and the flavor of the dish was right on.  The meat was tender and the scallions retained their beautiful color and flavor despite there being an excess of oil on the plate.  Some rice would have helped to absorb the BP spill, but we were saving our carb calories for beer, so that was not an option.  It was a dish that attracted some attention from the folks hovering while waiting for a table of their own, though.
I went with a shrimp dish since they had sold out of their green beans.  The shrimp were available either peeled or unpeeled and I took the easy way out opting for shell off.  I  love those hot little pepper slices that were scattered throughout the dish and my plate was not a victim of too much oil at all.  A pretty basic dish, but enjoyable.
I'll be at a little party in a couple of weeks at Ala Shanghai and will revisit their dumplings, but not their scallion pancakes. I will try to remain cognizant that like bacon and turkey bacon, there will be some similarities, but that, for me, it is best to think of the soup dumplings at Joe's Shanghai and those from Ala Shanghai as being from two distant regions rather than from next door neighbors.
Posted by DelSo at 9:27 PM