Sharon Jones and the Dap Kings 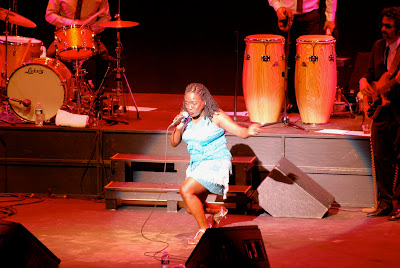 The Sharon Jones and the Dap Kings show at the Egg on Saturday was the final event of last weekend's grueling social schedule - and what a way to wrap things up! Again, I can claim only a cursory familiarity (thanks to WEXT, 97.7) with Jones and her music, but I do know that she and the band melted the snow at the Egg last weekend. Talk about smoking hot! If you're not acquainted with the band, here's some information that should get you up to speed. And - they were the back-up band for Amy Winehouse's Back to Black album in 2006. What you may not gather from the link is the fact that Sharon Jones definitely has taken the crown from James Brown as the hardest working (wo)man in show business. At 55 years old, she was an absolute dynamo never slowing down from the time her feet initially hit the stage. 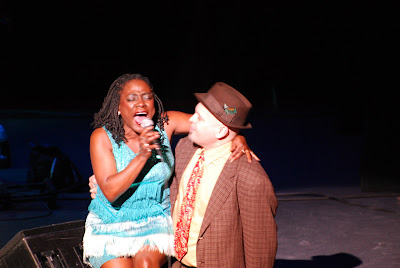 A couple of real writers have reviews posted, look here and here. If I had to really write a review, I would have to mention that the preliminary acts left me a bit puzzled.  Charles Bradley seemed like a bit of a caricature to me and I wasn't unhappy when he wrapped his set up.  The female singers were good, but not overwhelmingly so, which is what I guess you'd want from your opening act.   One of the night's highlights, for me, was witnessing Dimitrios Menagais (from the Wine n Diner) rock the stage with Sharon Jones early on in the show. I think she was quite taken with him - his zoot-ish suit and surprisingly terrific voice seemed to really be appreciated by Ms. Jones and I'm sure she didn't regret pulling him from the audience to join her on stage - very cool.  This show was very much a dance party - it was pretty much impossible to stay in your seat during Sharon's set.  Unless, of course, you were stuck between your freakishly tall friend and a guy with no sense of spatial allowance, but, that's another story all together. 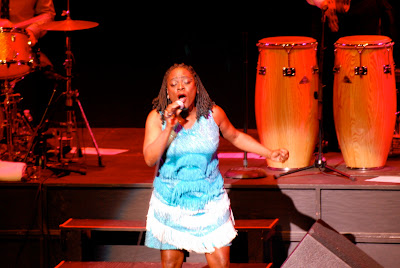 Although I hadn't really heen exposed to Sharon Jones until fairly recently, I understand she's played at the Green River Fest in Greenfield, MA and Mountain Jam at Hunter Mountain. Both of those music festivals are annual events, so keep your eyes open for another nearby appearance, get yourself a ticket and get ready to have a good time. 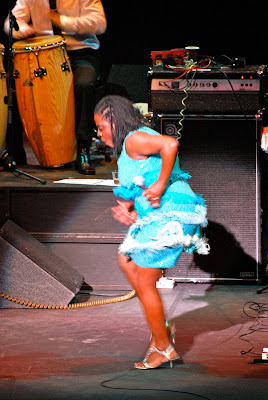 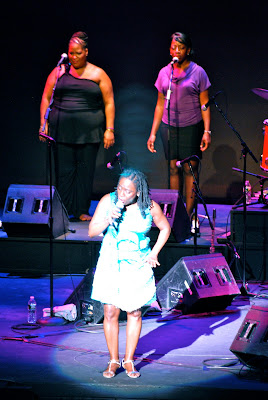