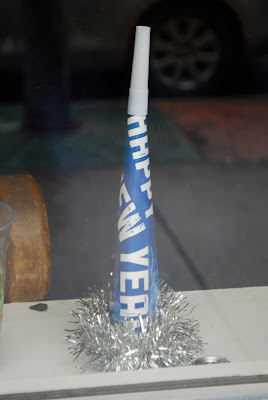 Despite my best intentions to have a completely relaxing Christmas break, somehow things got away from me. What began as a mellow holiday week with takeout food and easy Italian somehow spiraled into a frenzied period of mind altering substances and miles of New York State travel. Seriously, it was either back to work for me or rehab - I was that done.
Syracuse may seem an odd place to celebrate my first New Year's Eve off in nearly 10 years (not counting the one when I was pregnant with Q), but, my brother lives there and he doesn't have children and he does have a lovely hot tub.  See - I'm getting relaxed already without spending a dime.  To ease myself into a carefree couple of days, I took the slow ride out, driving Route 20 the entire way.  If you're not short on time, I recommend this method - much more scenic than the NYS Thruway if you're not in a rush.  The drive definitely prepared me for the evening's festivities, which involved... hmm... what did we do?  Exactly - nothing!!  Personally, I didn't even have a drink, other than the glass of Riesling I had at the country club on my way.  There was a tasty burger made by my brother at about 9:00, and some reality television, and that was the extent of things.  Pretty anticlimactic for a girl who couldn't wait to turn the proverbial page on 2010, huh?
﻿

Since there was no trace of a hangover to prevent me from having a full day on 1/1/11, I made the most of my time.  The day started with a soak in the hot tub, an activity I had previously imagined as a post-cross-country ski thing, but seeing as how it was 55(!) degrees outside all that beautiful﻿﻿﻿ snow (66+") was long gone.  At around 11, I headed downtown to explore the Armory Square area.  Have you been there?  It's kind of cool.  Instead of being a loooong strip of restaurants, bars and retail spaces (ahem, South Pearl Street, I'm talking to you), it is a concentrated area that spans a few blocks in more of a square, which, to me, makes wandering around a bit more interesting.  The businesses are primarily independent places, with a somewhat odd concentration of Irish pubs, and I was well occupied for a couple of hours until the rains came down. At which point I headed to the Carousel Mall for some additional shopping and to see a movie inappropriate for children, The Black Swan, which, by the way, I hated.
﻿﻿


After another evening of doing not much of anything, I headed back to Albany Sunday morning, this time via the thruway to assuage my parental guilt for being away from my family for 48+ hours.  When I pulled off to get some cheap Indian gas (which is not as cheap as it used to be), I decided to do something completely out of character and spontaneous.  Yep, that's right, I went over to Turning Stone to have a look around.  Did you know it is still possible to smoke indoors in New York State?  It seems to me that the Native Americans should be using their powers for more important things than pandering to the people who continue to kill themselves by smoking, gambling money they can ill afford, and eating from unlimited buffets.  Unless, of course, this is the ultimate revenge on the white folks, in which case I say bravo.
I don't know how people know to to play these games of chances... As I walked around the slot machines (?) I realized I didn't have a clue as to what to do at a casino.  The realization was both a relief (guess I'm not going to lose any of my hard earned cash) and a bit of a disappointment (looks like I'm not going to win $1,000s a la Matt Baumgartner and start my own business empire).  My curiosity about casinos was basically satisfied (or maybe I was merely repelled) so I got back in my car and headed east to the DelSo.