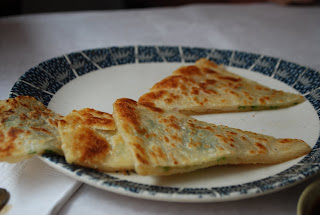 I happened to catch Sam Sifton's review of 456 Shanghai last week and decided to give it a try for lunch over the weekend.  Or, as I like to think of it when traveling with the girls, an afternoon food base for our evening's cocktails.  We rolled in at about 1 o'clock on a Sunday afternoon and encountered a modest wait to be seated.  We would have had our asses in our chairs a bit faster had the diners at "our" table not dawdled after they concluded their meal.  Note: when you have finished eating at a busy restaurant where there is an ever growing line of diners waiting to be seated, do not visit the bathroom one-by-one or linger to attend to personal grooming at the table.  It is just rude. 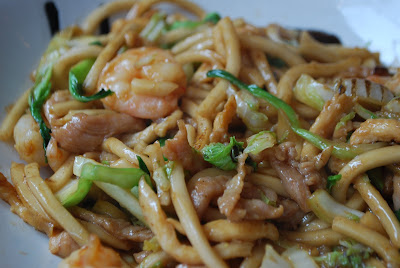 We scored a great table by the window and quickly made our decisions - scallion pancakes, soup dumplings, shrimp, pork and chicken lo mien, and sauteed green beans.  Our server warned us that the dumplings would take 20 minutes, a reality which dragged our light meal out into a 3 course affair, but no worries.  The scallion pancakes were fine - hot, kind of crispy, but not really special like the ones I enjoyed at Vanessa's.  Things picked up with the lo mien - it was flavorful, hot and with the perfect amount of oil to keep things delicious without leaning towards greasy.  I neglected to photograph the green beans which is unfortunate because they were a little different than what I have experienced in the past.  Rather than a simple garlic and oil coating, they had almost a hot and sweet flavor.  I do believe they even initiated my hiccup response to hot peppers, albeit briefly.  The sauce was a bit reddish and clung to the beans beautifully and while they were different than what I am accustomed to, they were enjoyed by all three of us. 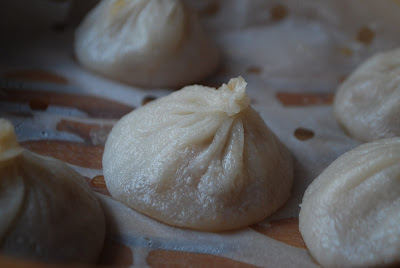 The real star of the show, though, was the order of soup dumplings.  I've had some debate with Albany Jane about soup dumplings, and I readily admit my novice status as a soup dumpling connoisseur, but the first time I tried these lovely tidbits of yum was at Joe's Shanghai and my initial exposure is what has defined them for me.  I've had them a couple of times locally at Ala Shanghai and I wasn't particularly impressed.  I mean, it is nice to finally get a chance to have them locally, but I think the dough is too thick and the flavors weren't as concentrated as I expected.  No worries - AJ and I remain good and we will certainly continue our mutual admiration of one another!  The dumplings at 456 Shanghai were of the same ilk as those at Joe's, which means more for me 'cause AJ won't be scarfing them all down - and that girl can eat.  My Sunday drinking dining companions had never experienced soup dumplings before and they were quite smitten by them as well.  There will be more dumplings in their futures for sure.
I can see myself alternating between Joe's and 456 on future visits to Chinatown because they both provide a satisfying meal at an incredibly reasonable price.  How reasonable?  Our shared meal of lo mien, green beans, scallion pancakes and dumplings came to...$25.75, pre-tip.  They don't place an automatic gratuity on the check at 456 as they do at Joe's, just so you're aware.  I'd be willing to pay a little more for the quality of food we consumed, and would suggest they charge a couple of additional $$  and devote the extra money to restroom clean-up.  They (yep, I checked them both out) were pretty groddy and I know I enjoyed my lunch more before seeing the state of the bathrooms.  All in all, thanks, Sam Sifton, for a good find in Chinatown.
Posted by DelSo at 1:06 PM