If you had told me ten years ago, that I would successfully complete a sprint triathlon in my lifetime, it would have seemed as  likely as the Twin Towers tumbling to the ground. Impossible.  However, yesterday I swam 1/2 a mile, biked 17.9 miles and ran 4 miles when I participated in the American Memorial Triathlon, a combination of physical events I had never attempted before.  Let me tell you how it went...

The carb-loading aspect of training was thoroughly enjoyable - especially after I was told that wine has carbohydrates!  I added two glasses to my evening meal at Viviano's in Warwick where Griffin and I had a delicious and fun dinner.

My night's sleep on Saturday wasn't the best, but the Sunday morning sky, filled with peach colored clouds and hints of blue, was beautiful as I drove over the mountain to Greenwood Lake.  I had checked in the previous afternoon so the morning went smoothly, other than the increasingly larger jitters wreaking havoc in my stomach.  I had joked quite a bit about my fear of drowning, but my nerves were definitely more generalized than that.  I don't know if you've participated in an event like this (and I know this was merely a sprint tri), but serious athletes show up at these things!  I couldn't help but be intimidated by some of the really ripped bodies surrounding me and my $300 used road bike.  At least I had a (borrowed) wetsuit to give the illusion that I was legit.  An illusion which would immediately be dispelled once I hit the water, of course. 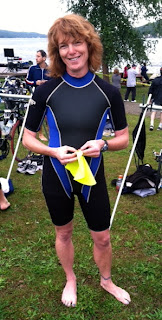 The swim segment was less frightening than I anticipated because of two things: 1. men and women were separated and sent out in 2 waves which prevented the kind of flailing and splashing and jostling that I had heard can occur in large group swims and 2. that wetsuit gave me confidence along with some added buoyancy.  I definitely hung back to avoid slowing anyone down and, since I had only trained (for the past 2 weeks) indoors, the sensation of having the waves slap me in the face was a bit disconcerting.  I did a lot of time on my back staring at the sky, which was not a bad thing.  Once I made it to the first buoy (1/3 complete), I knew I was going to be fine, unlike the three or four people I witnessed swimming ,or being transported via jetski, back to shore.  I was probably among the last 5 or 6 people back to land, but at least I wasn't last - an improvement already over my last tri outing. I slipped off the wetsuit, got my shoes, helmet and gloves on and headed out for a ride around the lake.
The bike ride was an area with which I felt fairly comfortable.  I've done this ride recreationally before and I knew it wasn't particularly challenging, but the recent rains had the potential to create some problems with debris and gravel deposits, so I rode with caution.  I definitely started to gain some confidence as I saw people walking their bikes up hills which didn't even threaten to take me out of my seat.  I forced myself to ride at a decent pace, yet did my best to preserve my legs for the run, which I now knew incorporated a couple of hills that would definitely feel more significant as the exertion became increasingly cumulative.  I passed a number of other riders, taking an unsportsmanlike glee in overtaking those younger than myself - a definite benefit of having one's age written on the back of one's calf.  I was overtaken only once by a really tall guy as we were riding downhill.  I noted the number (36) on his leg and promised myself I would catch him on the next climb - which I did.  Other than that, I was never passed (in any segment), a fact I take some pride in.  And, no, it wasn't because I was last either!

Getting off the bike felt good, but the first 2 miles of the run were pretty slow for me.  I swear my legs weighed about a 100 lbs.  Each.  But once I knew I was down to the last 2 miles and felt the endorphins kicking, I picked up my pace a bit and probably finished the second half of the run doing 8.5 minute miles, which, for me, is pretty good.  The tears threatened when I ran past the volunteer firehouse and saw the folded up uniform and helmet on a chair in honor of the fallen from September 11, 2001, but I managed to keep it together.  My support son, Griffin, met me and we ran the last 100 yards or so together, which was awesome.  Having him there, along with one of my best Laker girlfriends, was just what I needed at the finish line.
There were moments along the way when I doubted my ability to finish and I thought of those lost a decade earlier and kept going.  I told myself to be thankful for the opportunity to push my body and reminded myself that I never had to do this again.  Kind of like when I had my last drug free childbirth.  I am ridiculously proud of myself and am fully prepared to greet 45 next week with open arms.  And I'm planning to keep the date open for 2012.  Never say never.  Never forget.