What can you say about a kid quickly becoming a man?  I mean, I'm talking about a young teen on the express route physically, and perhaps even intellectually, to adulthood.  He is taller by the second as his height wrestles with the size of his feet for ultimate dominance, and his hair and voice are growing darker and deeper each time I look at him.  Something I now have to do, incidentally, by looking up rather than down. 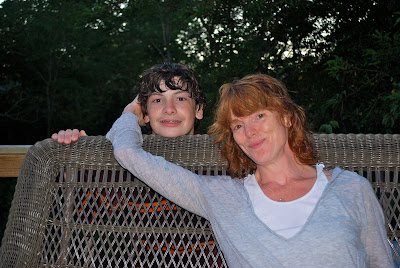 His dvr recorded list is very interesting and offers a peek into his personality.  It spans decades and seems to revisit some movies an uncountable number of times.  Get Smart (2008 remake), Airplane (1980), Captain America (1992), Muppet Treasury (1996, with Tim Curry), The Parent Trap (1961), Great Performances (Vienna Philharmonic), Jurassic Park (1993).  Wow, huh?  I'd say that about sums it up - he is cultured and silly and sentimental and adventurous.  He's my boy.
He's starting high school this month - a whole new world of opportunities and experiences are right around the corner. He is beginning to make more of his own choices beginning with the academy for his curriculum as Albany High tinkers with their academic structure to create more focused houses within a large school. His schedule arrived last week and he seems excited, for him. Teens have a tendency to be blasé so his eagerness manifested itself as a lack of disdain more than something most people would interpret as excitement, but I can see it.  He's ready for the next thing.  Glad one of us is.
Posted by DelSo at 7:54 AM