I have a friend who insists that I'm Jewish (she claims that my brisket is solid evidence that I am a tribe member). I must confess to a fondness of chicken liver pate, gefilte fish and religious services followed by cake - and Matzo Ball Soup.  I came to matzo ball soup a little later in life, the first time I remember ordering it was in a diner on the Upper East Side.  The broth was yellow with chicken fat and ceremoniously plopped in the middle of the shallow white bowl was a baseball-sized matzo ball flecked with parsley flakes.  Since I am all about the carbohydrate, the ratio of matzo ball to broth was like a dream come true and I thoroughly enjoyed my introduction to this classic soup.
A few weeks later, I decided to try my hand at making this simple soup.  I always have a few quarts of chicken stock in the freezer (don't you?), so I pulled out a couple of containers and thawed them at low heat.  I planned to use the basic recipe on the back of the matzo meal canister, however, I ran into a problem when I opened the brand new container only to observe a family of crawly creatures having their own party already - abort mission!  I replaced the canister and Take Two went off without a hitch - delicious comfort in a bowl of yumminess.  Since that time, I've pretty much stuck with the standard suggested recipe, but today, taking into account the beautiful kale (grown in the DelSo) I had been given from my awesome neighbor; as well as the first cold(s) of the season, I really kicked it up a notch.  Here's how it went down:
To begin, I cut the top off of a head of garlic, wrapped it in foil and roasted it at 400 until soft.  While that was in the oven, I heated up 2 quarts of chicken stock, adding some baby carrots since I like those to be a little soft, which takes some time.  I made the matzo ball batter (? dough?) and allowed it to firm up in the refrigerator as suggested.  The kale was coarsely chopped and added to the simmering broth along with the softened garlic cloves, which I kept intact.
When you roast garlic it becomes wonderfully mellow - go ahead - eat it squeezed on a piece of bread.  You will love it!  The only thing left to do was add the matzo ball mixture.  I used a teaspoon and scooped a heaping measure for each ball, kind of putting them in the same size range as a golf ball.  I cooked the soup for another 20 minutes or so, adding salt, pepper and a tablespoon or 2 of fresh rosemary.  An aside - I keep waiting for my rosemary plant to turn brown and drop all of its needles, but, knock wood, so far so good. 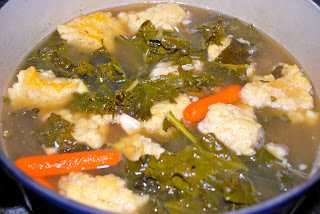 This soup was the ultimate penicillin in a bowl - between the garlic, the greens and the black pepper, I seriously felt my chest start to expand as the liquid magic flowed through my previously congested body.  Paired with a hunk of bread from Sunday's baking adventures and I was completely pleased with my lunch.  Have some fun - make some soup.  It really will cure what ails you.  Trust me on this one - because I know.
Posted by DelSo at 8:05 PM