On being not cool...

Friday morning I got a Facebook message from a fellow Laker-girl making a couple of tickets to the DMB show available to me. Day of the show miracle, I call that.  I was so excited to get home and surprise Griffin with the unexpected news.  History: after relying upon someone else to get us tickets and being disappointed with their lack of follow through, Griffin and I were resigned to the fact that weren't seeing the show and the date of the concert had pretty much fallen off our radar.  When I got home in the afternoon and made the big announcement, it was very well received.  Griffin was psyched and after changing into a DMB t-shirt I bought him at a previous 2010 show, and a pair of skinny jeans without ripped knees, we headed down to his first big indoor arena show.  With a light meal at Dale Miller to proceed the show, naturally - he was feeling like filet mignon.  Not too shabby for an 11 y/o, right? 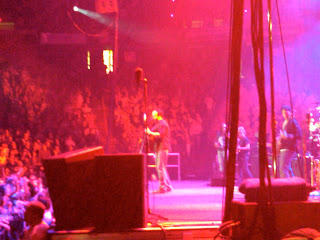 The fact that we had some quiet time to dine prior to the concert, gave us a chance to talk quietly - which was good.  It allowed Griffin plenty of time to express his appreciation and excitement about the meal and show, as well as the perfect opportunity to complain about how completely uncool I am.  Apparently part of the problem is my refusal to allow him to obtain a Face Book account.  Sorry - rules are rules and they have rules for a reason.  I'm all about breaking a rule which doesn't make sense...like the No Right on Red sign in the Delso neighborhood, which I pointedly ignore at 5:30 in the morning on my way to the gym, solo in my family wagon.  But the Face Book rule seems like a reasonable one, especially when you're talking about it in the context of an 11 y/o who too often texts me during the school day to complain about how bored he is.  Obviously, he already has some challenges following rules related to social networking and modern communication.  No reason to condone or encourage an additional means of rebellion. 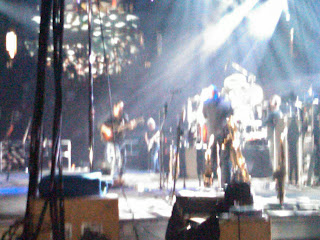 The other major coolness flaw I'm sporting is connected to our household adherence to the recommended audience for video games - if it is rated M for Mature, my kids aren't playing it - or at the least, they won't be playing it at home on our Wii.   I realize that they are exposed to some violence and inappropriate humor while watching television, but they don't watch it over and over again while trying to shoot someone.  And don't get me started on those games designed to simulate robbing a bank, stealing a car or sexually assaulting women - nope, not in my house.  I understand the Supreme Court is preparing to debate this issue, but I don't really need Clarence Thomas to tell me what is inappropriate for my child.  Thanks, but, no thanks.  This topic can certainly be revisited at some point in the future, but for now the decision has been made.
Someday, I hope Griffin will understand and appreciate how being a cool mom has a lot more to do with with the places I do take him, rather than the virtual places I refuse to permit him to visit.  Until then, I'm okay with being "totally not cool."
Posted by DelSo at 5:06 AM